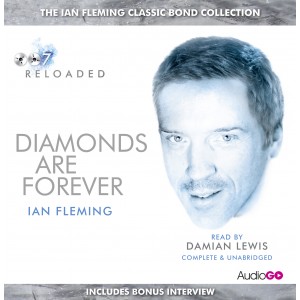 Until a few days ago, I didn't know that today was Global James Bond Day. And to celebrate 50 years that Dr No came out in cinema, AudioGo is releasing all James Bond books as audiobooks (007 Reloaded), each read by a world-class actor, ranging from Bill Nighy, Hugh Quarshie, Jason Issacs, Rosamund Pike and David Tennant. And, out of nowhere, the lovely people at AudioGo HQ emailed me asking if I wanted to listen to one.

I, knowing Bond from the movies (and a friend has given me the first James Bond novels [I read half of Casino Royale and then lost interest with it]), said yes. I looked at the actors and made a small list of Bond that I thought "Sounds cool" and asked them to surprise me. I was given Diamonds Are Forever, read by Damian Lewis (Emmy winner for TV drama Homeland - which I haven't seen. Shhhh!).

Diamonds are being smuggled from Africa to USA, via Britain. Bond has to assigned the mission to get inside the smuggling ring and smash. But to do that, Bond has to do something he's not very good at: he has to be patient...

Now, Damian's voice. I love his voice. Once I finally got into the story, I really enjoyed listening to his voice. There was one or two times when he made a character's voice a bit cartoony. And another time (twice, I think), you could hear that he was in a small recording studio because I thought I heard his voice bounce off the walls. But I'm nit-picking, me thinks.

The story itself. Now this is where I get a tad unsure of myself. I'm not sure what I was expecting but Bond being patient wasn't one of them. I think the movies were my problem. I kept thinking that, any moment now, he's gonna jump into action. Nope, that didn't happen. Plus, with Bond being all patient and waiting, he seems to make a ton of mistakes, which for a secret agent, seems a bit odd. An odd looking man holding only a toilette bag is watching you funny? Don't you think that's odd? Don't you think that there might be a camera in that toilette bag, taking photos of you? And then you see a second man who's sucking his thumb where days earlier, you are told that there's a hitman/assassin in the ring who sucks a wart on his thumb when nervous or stressed? And the fact that this man is seems to be paying close attention on you, doesn't ring any alarm bells? Come on James, you're meant to be smart!

And it very much of it's time. Some of the terms used wouldn't be used today. It just wouldn't be acceptable.

While I am intrigued over James Bond and I will probably try and read the books, I think that the movies have clouded my view on the original stories. So, if you're going into the book series, you have to throw the movies out of your head. Might be great as a starting point, but when you have a book that is COMPLETELY different from the movie...
Posted by Pewter Wolf at 09:00:00