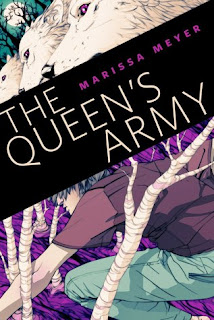 Another day, another eNovella review. I'm seem to be going through a blitz/binge of them lately. And why not? Am enjoying myself. Today, am going to talk about The Queen's Army, eNovella that is sandwiched between Cinder and Scarlet.

Z must leave his family. He must join the Queen's army. It should be an honor, so refusing is not acceptable. He must become a soldier for his Queen and learn to fight. Fight to the death.

Unlike most of the stories from the Lunar Chronicles, this takes place on Luna and is told from the point of view of Z, a lunar. And it was interesting. I always imagined a lunar very different from how this story depicted them. And the story itself, how a child became a soldier... that was interesting too. Though there were moments I went "That's horrible!". I believe Marissa might have touched on some of these in Scarlet but in here, we see it and there is flinching.

This helped a lot on why characters behaved the way they did in Scarlet - this is a very character driven story and this help explains things if you read Scarlet and you had questions. Now, to read this before or after? I read this after Scarlet so I was reading this going "Oh, you have no idea what's going to happen to you, do you?" and getting tense. But I knew all the info and this cleared a few things up. I do worry that if you read this before you read Scarlet, you will pretty much guess most of the plot for Scarlet, BUT you will have the histories of the characters so it's very conflicted.

If you're a fan of the series, read it if you can! You can buy on your kindle or read of Tor.com for free!
Posted by Pewter Wolf at 08:00:00