Surprise! I have a guest post for you guys! And am a tad shocked this is happening, but am thrilled to welcome Brent Bailey to the blog.

Now, for those of you who aren't aware of him, Brent is an actor on TV and short films, but most of you guys should know him as Alex Knightley from the hit web series, Emma Approved (youtube.com/user/pemberleyDigital), which completed its run of August last year. Not catch the show? The first two episodes of Emma Approved at at the bottom of the post!

Not sure how I got Brent to agree on my blog, but a big thank you for Brent for taking time out of his busy life to answer these questions! Before I throw us all into the Q&A, if you want to follow Brent of Twitter, you can check him out at https://twitter.com/BrentMBailey. And now, with that out of the way, onto the Q&A! 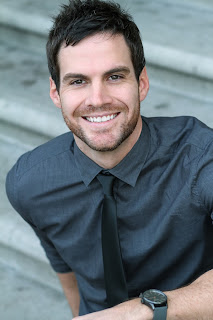 Brent, thank you so much for answering some questions for my blog. As most people will know you from Emma Approved, could you explain about the series and your character, Alex Knightley, for those who aren’t aware of the show?
Emma Approved is a modern day adaptation of Jane Austen’s “Emma.”  The story is about Emma, (Joanna Sotomura) a matchmaker who has gone into business with her lifelong snarky friend, Alex Knightly.  Emma runs the matchmaking side and Alex runs the business side.   The story takes you on a journey through the difficulties of running a business as well as the complexity of love.  It’ll make you laugh and cry and then want to watch it all over again.

Could you tell us how you got the role of Alex Knightley?
I had actually read for The Lizzie Bennett Diaries a couple of times, so Jenni Powell and Bernie Su (producer and executive producer) were aware that I existed. They were just trying to figure out what role I was best for.  When Knightley came around I went in and read, and it definitely felt right.  There was so much of my personality I was able to bring into the role, and I just felt really comfortable with the character.  The rest is history!

Because Emma is such a well-loved story, did you feel any pressure on portray Knightley loyally, but make him your own character, different from other interpretation?
Honestly I didn’t even think about it.  Emma has been redone so many times now that I didn’t feel there was a single iconic person that played it best.  Each adaptation has been different which has given the actors playing the roles some freedom to bring their own interpretation to it.  I just went in, had fun, and hoped that the fans of the show would enjoy what we were making.

Were you surprised by how popular the show became?
Since LBD was so successful I expected us to have a pretty decent amount of people tune in.  Bernie had called me when he was offering me the role and let me know what to expect.  So it did seem like we were prepared for what was to come.  The only thing I didn’t know was that the fans were going to be so amazing.  I am very grateful for those that have stuck with my career and me since the show has ended.  There are good things to come, I promise. ☺

What was it like to have your character and, to a point, yourself compared to the male “heartthrob” of another very popular web series, The Lizzie Bennett Diaries, of William Darcy, played by Daniel Vincent Gordh?
Flattering! Daniel is such a great guy and he did a fantastic job with Darcy.  So to be compared to him in any aspect is a compliment.  We’ve actually joked many times about doing a show together and having our characters be brothers.  Maybe one day!

After you wrapped Emma Approved, you did two episodes of another web series, Classic Alice? What was it like jumping from one popular web series into another? Did you feel any pressure?
Classic Alice actually just felt like a bunch of friends getting together and having fun. It was such a quick and easy day on set for the Emma crew, and we all had a blast.  Our roles were really just fun additions to the show, so I didn’t feel any real pressure.  Cameos are great because you come in, get to make a bunch of new friends and then get to head on to the next job!

Why do you think web series as a whole (such as Emma Approved as well as Lizzie Bennett Diaries, New Adventures of Peter and Wendy and Night School: The Web Series) are so popular?
They had built-in fan bases. The books have been around for so long, and the stories have been told many times.  So instead of starting from scratch and having to introduce new characters and new storylines, you are rebuilding ones that have already been done.  They do the same thing with TV and Film, which is why you see reboots, remakes, etc.  The key is to make sure that when you are re-creating something, you do it well!  Bernie is great at that! So when you have a concept that already has mass appeal, and then you create a new version of it and do it well, it’s a recipe for success.

You have acted on TV and short films. What was it like to go from working on a “traditional” medium to a “new” medium of a web series?
The biggest difference between TV and Web is the budget.  On TV shows you have a trailer, large crews, expensive equipment, fancy locations, etc.  With web it’s usually a bunch of awesome people getting around making something special without a lot of money.  I enjoy both, but my goal is to continue to transition further into TV and Film.  That being said, if a good web series comes along and my schedule allows it, I’d be interested for sure.

Speaking on acting on TV, you have done acting jobs for Hart of Dixie, Palo Alto and Rizzoli and Isles. What was it like working on these hugely popular shows?
It was a blast.  I had so much fun on all of those shows, and every time I am on set it’s a new experience.  My favorite part is to check Tumblr later to see how many gif’s got created of me trying to introduce Jaime King to my “mama.”

(Edit from Pewter Wolf: I can show you the gifs Brent means... I couldn't possibly...

*tries to look innocent* Sorry, Brent, but I HAD TO! Anyway, moving along...)

As a fan of Rizzoli and Isles, I have to ask what it was like acting opposite Lorraine Bracco and Bruce McGill, who play Angela Rizzoli and Detective Vince Korsak respectively?
Lorraine was incredible. She is so talented and makes it look so easy!  I really hope I get to work with her again on something else!  Bruce is also extremely talented and had lots of good tips and advice for us.  Both of them made the workday so easy and so wonderful.

One last question: what are you currently working on, if you can tell us? If not, what was your last acting role and what information can you share?


I actually can’t say specifically what I have coming up yet!  It is really exciting though and will be my biggest big budget movie role yet!  I think I’ll be able to talk about it more in September, but what I can say is that it’s going to be a great movie and it’s got some huge actors in it that I really respect and can’t wait to work with!  Other than that I have a few more commercials that will be coming out soon, and hope to snag a few more TV credits before I leave in September to film the movie!