I have a press release for you guys - you can blame Felicity from Midas PR for me posting this. But, Audible is releasing their fourth original programme - and it is a retelling of The Jungle Book!

It has a wonderful cast to this (see below) and for a limited time, it's free! FREE!!! Plus, with it being free, Audible is donating 25p of each download to the ZSL to raise awareness for endangered species that are the inspiration behind this story!

You can download it now and my review of this will be up on Friday. But now, off to show the press release! 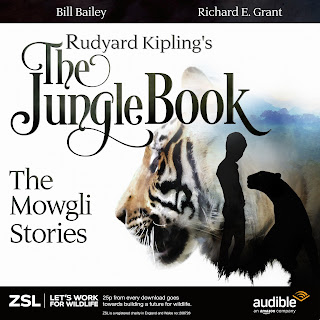 Audible.co.uk to donate 25p per free download of new all-star audio adaptation of Rudyard Kipling’s The Jungle Book- The Mowgli Stories to ZSL

UNDER EMBARGO UNTIL 00:00 26 August 2015: Audible.co.uk has produced a new full-cast dramatisation of Rudyard Kipling’s The Jungle Book – The Mowgli Stories, in association with charity partner the Zoological Society of London (ZSL).

Rudyard Kipling’s The Jungle Book - The Mowgli Stories is out on 26 August and available for free at:www.audible.co.uk/jungle. 25p from every download goes to help ZSL build a future for wildlife.

The magical story-telling and unforgettable characters in Bev Doyle and Richard Kurti’s audio adaptation of this children’s classic have been brought to life by many well-known voices from British film, TV, radio and comedy, including Bill Bailey as Baloo, Richard E Grant as Kaa and Martin Shaw as Shere Khan.

The partnership between Audible.co.uk and ZSL will help highlight the plight of many of the animals who featured in The Jungle Book and are under threat in the wild, such as the Bengal tiger (Shere Khan). The creation of India’s tiger reserves in the 1970s helped to stabilise numbers, but poaching to meet a growing demand from Asia in recent years has once again put the Bengal tiger at risk. The sloth bear (represented by Baloo), which could once be found throughout India, Nepal, Bhutan and Bangladesh, is now threatened by hunting and habitat loss. Sloth bear numbers continue to decline and it is now listed as vulnerable by IUCN.

Sandra Crewe, Head of Corporate Partnerships for international conservation charity, the Zoological Society of London said: “It’s a sad fact that many of the animals that inspired the characters of The Jungle Book are today battling against unprecedented threats in the wild, with some, like the tiger and elephant, facing the terrifying prospect of extinction. We are delighted to be the official charity partner of Audible’s production of Rudyard Kipling’s The Jungle Book – The Mowgli Stories. This fantastic new adaptation is an opportunity to raise awareness of this issue and raise funds to support our worldwide conservation of wildlife and their habitats.”

Audible.co.uk head Tracey Markham said: “We are committed to producing new exciting audio content for our listeners and this adaptation is really something special. We are working with some of the most talented writers and actors around to make brilliant new audio entertainment. The charity partnership with ZSL is the first of its kind for us and we are really excited to be working with them to support wildlife conservation around the world.”

Rudyard Kipling’s The Jungle Book – The Mowgli Stories can be downloaded and enjoyed on a wide range of devices including Kindle Keyboard, Kindle Touch, Kindle Fire, the Audible apps for iOS, Android, and Windows Phone 8, PC, Mac or an MP3 player. The production provides three hours of listening entertainment and it is most suitable for children aged 8 and over, as well as adults of all ages.

It is the fourth production from the original programming team of Audible.co.uk. Previous productions include The Child and AMOK, two full-cast adaptations of best-selling novels by Sebastian Fitzek, and Six Degrees of Assassination, an original thriller by Meadowlands and Silent Witness writer Matt J Arlidge.
Posted by Pewter Wolf at 19:56:00