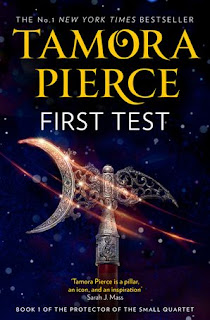 You would think I would focus on the one Tamora Pierce series that I started to read a few months back - Wild Magic, the first in the Immortals series (I have the second and the third on my kindle, as well as Tempests and Slaughter) - but when I was randomly searching my BorrowBox app for a short audiobook (I wasn’t ready to dive into the two long audiobooks I bought several months back…), I spied First Test and went “Ooooh!” then requested. Only to discover afterwards that BorrowBox only had this and Wild Magic as audiobooks so if I liked what I heard, I would have to find a way to continue the series!

Keladry of Mindelan is the first girl who dares to take advantage of the new law of Tortall, allowing females to train for Knighthood. After growing up on the Yamani Islands, she knows women can be fearless warriors and she wants to be one. But Lord Wyldon, the training master, is dead against the idea of girls becoming knights and forces the king to say that Kel must do a year’s trial - something no boy has ever done. Kel is determined to prove herself, just to be seen as equal…

I did like this audiobook. I want to make that clear. It was a nice start to the fantasy series and I rooted for Kel. I think this is the set-up book as it’s letting us know the characters and put us in the right places and, hopefully, as the series moves forward, it gets bigger in scope and story-arc. 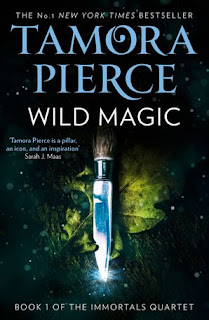 I did have times listening to this audiobook where I did struggle. But I can’t figure out if I didn’t click with the narrator or if I felt uncomfortable with the level of sexism that Kel faces. And I think this is important as sexism, sadly, still does exist and it’s important that we see characters stand up and fight back against it. Plus, what shocked me was Kel and her classmates are ten or eleven years old, but the level of sexism issued at Kel disturbed me.

I did like this book, and it made a nice change from the heavy “straight white male” fantasy that exists in the adult fantasy genre, but this is a starter book and, as the series goes on, I want more something a tad meatier.

Or maybe I shouldn't mix my Tamora Pierce reading up! Oh, whatever I decide to read next by her is going to really confuse my brain, isn't it?
Posted by Pewter Wolf at 08:00:00