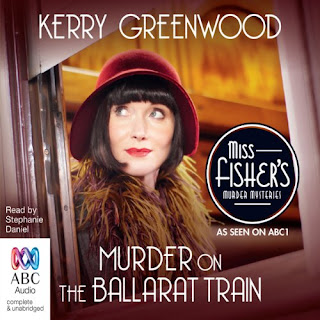 I tried to audiobook the first book in the Phryne Fisher Mystery (or the Miss Fisher’s Murder Mysteries, if you are a fan of the TV show via Alibi or Netflix), Cocaine Blues, a few months back but due to my hay fever headache and me not warming to the first few chapters (I don’t think I got halfway through chapter 3), I DNFed it. So, why did I decide to try the third book in the series? I wanted something light and quick after audiobooking Eragon, which I struggled with.

All Phryne Fisher wants is a week of fabulousness in 1920s Ballarat, and going by train should be fun. Expect she woke up with the first class carriage filled with chloroform. Soon, she finds herself in the middle of several investigations: the murder of an elderly woman whose body was dragged up out of the window, a girl with no memory and rumours of white slavery with young girls rumoured to be sold into prostitution. But Phyrne will get to the truth before a possible second murder happens, and if she can have a discreet dalliance with a young man, so be it…


This surprised me as this is an Australian cosy murder mystery. I knew it would be light and will refresh my reading pallet, but this was a fast, fun, silly listen.

I am going to admit that when I listened to the start of Cocaine Blues, I didn’t warm the narrator but I warmed to her a lot more here. I do think the first book in a series is tricky as it has to lay things down and get readers comfortable with the world and the characters, but with books that happen later in the series, you can jump straight into the story.

Phryne Fisher is a really interesting character. She’s an amateur detective, likes fashion and fun, and she likes sex. Remember, this is set in the 1920s so sexual attitudes was very different from now, but I found Phryne a breath of fresh air confirmed to other leads I’ve read in murder mystery novels.

I do wonder if this plot is a tad forgettable, but I had fun with this and I am considering audio booking another Phryne Fisher novel (not Cocaine Blues - I’m not brave enough to go back to the start just yet!). I’m thinking either Flying Too High or Death at Victoria Dock. I might do a poll to decide which in the next few weeks (not sure on which social media platform. I’m thinking Facebook or Instagram so keep your eyes peeled). While this didn’t rock my world, this was fun and I plan to read more Phryne and, if brave, watch the TV series.
Posted by Pewter Wolf at 08:00:00