As some of you know, I was going/gone to a book signing of the lovely author, Becca Fitzpatrick this Sunday just gone at Bluewater.

I swear I don’t go all gooey and “OMG!” over famous people. But I did on Sunday.

After some mad rushing to the shop and then back into the shop to buy myself copies of Becca’s books (I left my copies at home. ROOKIE MISTAKE!!!), I stood in line (which was long!) with a friend of mine, laughing at the randomness of Twitter. Mostly the hashtag of #MoviesInMyPants (which was basically adding the words “In My Pants” to the end of film titles. We came up with “Raging Bull In My Pants”, “Gone With The Wind In My Pants”, “12 Angry Men In My Pants” and many, MANY others!)

Almost, I met some Twitter-Friends. Laura (aka @sisterspooky) and very briefly Leanne & Rebecca (aka @leanne_luce & @conesound). They were a tad ahead of us in a line and Laura hunted me down and we met. We hugged. We compared our bright yellow shoes (she has bright yellow boots and I was wearing Hufflepuff converses!).

More waiting… and me looking up and down the line to see no guy holding the books in his hands. A tiny fear confirmed (to be the only guy in the line), I waited my turn, wondering why most blokes were there? Driver? Partner? Driver? Emotional blackmail? All of the above (I have used them. But shh! No one needs to know that!)

And then we were allowed to enter Waterstones! Over an hour wait and we’re nearly there…!

As I joined the line in the bookshop, Laura, Leanne and Rebecca appeared, having their books signed and they were giddy! “Oh, she is expecting you!” Laura says, smiling. “And she wants to see your converses!”

I was being expected… oh heck!

You see, Becca is on twitter (here she is!) and seeing as I am a bit of a twitter addict, I tweet her and she tweets back (I love authors that do that. Respond to their fans/readers). So, to fact that she knew I was there and in line was… er… a strange experience.

And then I turned round and saw the shirtless model with his six (possible eight) pack and his stuckon black wings and everyone in front and behind me melting to the floor. I think me and my mate did also.

I wish I was in the meeting when that was decided. I have this image of Becca going to the UK publisher, “Listen. I am going to do these many dates, meeting readers and, you know, I need something to keep me going when I had a bad night’s sleep or when I need a pick me up. How about a shirtless young hottie who we can say is ‘Patch’. What do you think?” (to who ever thought of getting this model/Patch, I am pretty sure nearly everyone who went to all Becca’s book signing is EXTREMELY grateful!)

And then, I saw and then met Becca.

Earlier on in this blog, I said how I don’t go all gooey and “OMG!” over famous people. Well, I got very star-stricken. And you know when you get to meet someone famous or someone you respect and admire, you seem to lose any normal sense? Well, my brain did that.

While I said “Hello,” and Becca said, “I was told by Laura to show me your shoes” (of which I was teased over because I put my shoe on the table! Smooth, much?), my brain was thinking, “I love her hair!” (I so want to time travel and shake myself because of this thought!).

It was short, brief and awesome! We said “Hi” to each other, she signed my book, chatted briefly about Laura (hear that, SisterSpooky?) and then had a quick photo. :D

And then, we hugged.

Am trying OH-SO-VERY-HARD not to go all fanboy and squee very loudly! But I got so flipping giddy about that for the rest of the day! (And now reading that back, I sound like a mad stalker! I’m not, Becca! PROMISE!)

But it was cool. So cool!

So, to Becca, thanks for coming to the UK and thank you for bearing with someone as excitable as myself. Can’t wait for Tempest and as for Crescendo’s ending… WHAT THE FRIDGING HELL?! 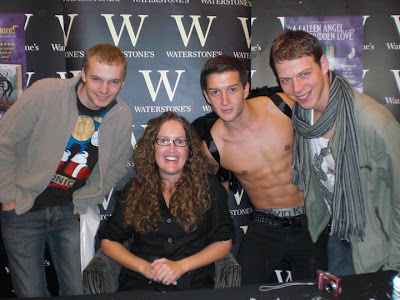 And just to prove how brilliant Laura's and my boots/Converse were... 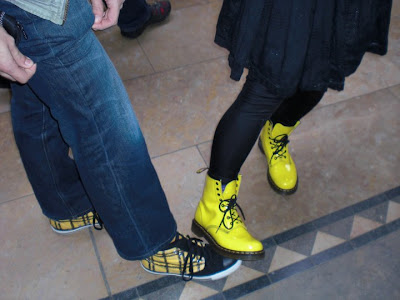