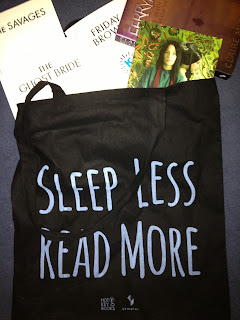 On the Saturday just gone, I was at the Hot Keys Book and the Templar Books Book Bloggers Brunch. And after having to handle some small London Underground troubles (the Circle Line wasn't working due to maintence repairs so I walked there. In London. Pass strange street names that made me laugh), I got there and had a wonderful time. It was lovely to catch up with some bloggy pals I have me in previous events (and I scare on Twitter & Facebook), meet some new bloggers (who are just as hyper about books as I am), talk to the lovely people at both Hot Keys and Templar and, after having both publishers chat to all of us about exciting books in their "Spring Line" (that's from now till June/July), chatting to some authors and getting hyper over some books that just sound wonderful.

So, to everyone, from Hot Key and Templar staff, blogging pals old and new and to the authors who made me go "I MUST READ THE PRETTY!", thank you for a great few hours. I got some funny looks on the train home, but it was a blast.

Now, for the main point of the blog, BOOKS! Or, some books that have SERIOUSLY wetted my reading appetite and I think you guys will love! It's a real mix bag so... let's get cracking!

THE QUIETNESS by Alison Rattle (OUT NOW-ISH)
Let's start with a surprise one as, when Hot Keys were talking about this book, I was all "oooh!" as it sounds a bit different to my normal reads, but it didn't grip me. Until I heard the term "baby-farming". I'm not going to go into what that term means, but here's the basics of the book: In London 1870, two girls lead very different lives. Queenie longs to escape the slums tat she's grown up in, where life is a struggle, no matter what she does. Ellen, on the other hand, lives a privileged life, but is lonely beyond words. Soon, their worlds crash together and their lives will change in unspeakable ways...

RED INK by Julie Mayhew (OUT NOW)
Another surprise for you, but from all the whispers I've heard from those who have read this, this is a must from the books we were shown/given. Melon is struggling to come to terms with the sudden death of her mother, who was knocked down and killed by a London bus. Only holding "The Story" - a fairytale, if you will - close to her heart, Melon begins to see the world for what it is. And begins to see sides to her mother that she never saw before and never thought could exist before...

FERRYMAN by Claire McFall (OUT NOW)
It's the cover that got me. It's shiny. And the idea of a train crash. And that the author was just as hyper as us bloggers when we chatted to her. So, yeah, I wanna read it. Anyway, the story: Dylan emerges from a wreckage of a train crash, she believes she's the only person who survived. Expect she isn't, according to the boy on the hill. She's dead, and he has to take her through the wraith-infested wasteland to the Afterlife. But what happens to them on this journey might change all that... [FYI, Claire is writing her second novel which tackles Scottish Independence and terrorism. Yep, am excited for that one as well.)

DEATH AND CO by D.J. McCune (MAY 2013)
All Adam wants is to be normal. Is that so hard? Yep. You see, he's a Luman, one of the members of spirit guides who guide dead souls into the afterlife. And when this job is non-negotiable (thanks parents!), Adam finds it hard to be normal. He can't go on dates in case he has to leave half way through because of a job. He can't hang out with friends if he has to lie to them on why he missed their last meet-up. And homework... the less said, the better. So when Adam discovers he has a rare gift that could undermind everything a Luman stands for, he'll have to make a choice... 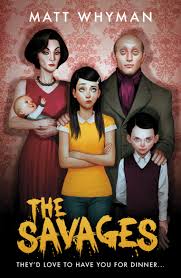 THE SAVAGES by Matt Whyman (JUNE 2013)
Some of you guys, I suspect, know who Matt is. He has written several adult novels and is agony uncle for BBC Radio 1's The Surgery. So, you think this will be dealing with tough teens issues, right? Er... not exactly. Chatting to Matt made me laugh my head off and go "This book is so dark and twisted, I HAVE to read this when I can!". The Savage family look like a "typical" family. Expect, they're not. They're hiding a dark secret. So, when Sasha starts dating Jack, a vegan, her family react badly. And when a curious detective begins snooping around, how long will the secret stay secret?

FRIDAY BROWN by Vikki Wakefield (JULY 2013)
If anyone ask if this is linked to Mrs Brown's Boys, I'm not sure how to react. Probably laugh then throw the book at you. No, this should be well known to your Australians as its won a high-profiled award - the Adelaide Festival Award for Literature 2012 - and now, we're getting in the UK. Friday travels the endless roads of the Australians. But when her mother dies, Friday starts running. Running from a family curse that might or might not be real. And trying to running to the current of life that, before she would be swept away, Friday is struggling to stay afloat. But when something terrible threatens, Friday Brown must stop running from her past and she must fight...

THE GHOST BRIDE by Yangsze Choo (AUGUST 2013)
When I saw I was given this, I think I made a noise. A squeal? A gasp? Why, I hear you ask. Well, this sounds scary. Perfect for the summer months! Anyway, when Li Lan is asked to marry the wealthy Lim family, her father agrees. Only, the Lim's son is dead. She will be a ghost bride. As Li Lan tries to come to terms with her ghostly would-be suitor, she finds herself having desires to the Lim's new heir. But it's the nights she should be fearful of. At night, she finds herself drawn into the Chinese afterlife, filled with ghotly cities, paper funeral offerings, vengeful spirits. If she's not carefully, she will be trapped there forever...

MAUREEN JOHNSON
If I didn't mention the news of Hot Key publishing Maureen Johnson for the next few years, you would probably have a go at me. So, Hot Key is going to publish Maureen Johnson. And they have a huge back catalogue to publish. They are going to publish Maureen's debut novel, The Key of the Golden Firebird, are going to publish the third and fourth books in the Shades of London series (and they have confirmed that  they will try and keep the cover as similar to the HarperCollins covers), and all the books in the Suite Scarlett series. They might be publishing more over the course of the next few years but these are GOING TO GET PUBLISHED IN THE UK!

There's more, but am going to stop now. I want to read and I want to know your reactions. So, what do you guys think? Do any tickle your fancy?
Posted by Pewter Wolf at 21:09:00