eBook Review - The Fox and the Ghost King 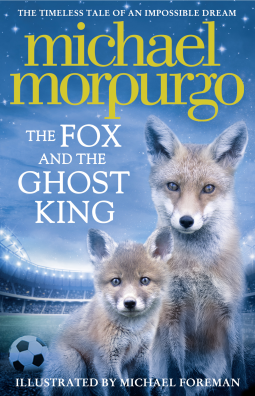 This was a weird, random choice that I saw on NetGalley. As soon as I read the first line, I went "This sounds nuts. I have to read it!". Plus, the author is Michael Morpurgo, author of War Horse, and as I have never read him before, I thought this would be a fun middle-grade to read.

Foxes are football fans. And they follow, of course, the Foxes (aka Leicester City FC). But the team keep losing games. A bit annoying for the Foxes but when Daddy Fox and his kid hear a voice of a ghost king, buried under a car park, wanting to be free, that could all change...

This was fun. It was a fast middle-grade read for me that mixed Leicester City FC's rise to victory in the 2015-2016 Premier League and the discovery of King Richard III's remains under a car park quite well. This does well with foxes and is perfect way to get younger readers into football, nature and history (with the story touching upon Shakespeare as well).

It was a fast read for me (I would have liked a bit more meat on the bones of the story, but I am way older than the target readership) but I think younger readers will love the story and the illustrations and parents will find it utterly charming.
Posted by Pewter Wolf at 07:30:00