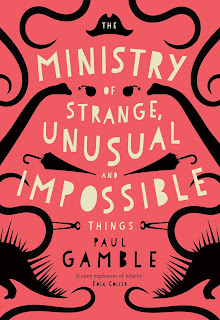 AM BACK FROM MY NEW YORK RSM! Did you miss me? No? Rude.

This isn't the post I was planning to write for my first day back on the job but this comes a few days ago and it just felt like the perfect post to start my post New York blogging.

So, today, I would like to welcome Paul Gamble, author of Ministry of SUITS, to the Pewter Wolf. (Strange, Unusual and Impossible Things) is a ministry hidden in a museum in Belfast. Here, its members must investigate the strange, weird, unusual and impossible. This includes Jack and his frenemy Trudy have to work together to uncover one mystery: where are all the school's oddbods disappearing to...

Before I go further, I want to thank Paul for finding time to write this post and Andrea from Little Island for setting this and the contest below (oh yeah, there's a contest at the bottom of this post! SURPRISE!!!).

Paul Gamble, author of the Ministry of SUITs (Strange, Unusual and Impossible Things) writes about why authors need to be brave sometimes, being different and why agents are worth their weight in gold…

As an author I certainly don’t consider myself a brave person. And I think that’s obvious. Because if I was brave, I’d be out having adventures, rather than writing about other people having adventures. In fact, at times I have so little bravery that if I’ve just written a particularly scary scene I have to make myself a cup of tea and then go and lie down in a darkened room and play Bach’s Air on a G-string before I can face the terrors of the laptop again.

But being an author, sometimes there are moments when I wish I could be as brave as the characters I write about. And my characters are very brave indeed, dealing with pirates, monsters and dinosaurs, despite the fact that they’re only twelve. Jack and Trudy the two central characters have to deal with being attacked by ‘stuffed’ animals, fighting off pirates and even having to deal with the interdimensional evil monster called Cthulhu who is in charge of the Ministry of SUITs filing section. And if that doesn’t sound too scary Cthulhu is in a rage most of the time, because he absolutely hates it when agents return files with coffee-cup-rings on them.

But real courage is remaining steadfast when you don’t even know what you’re up against. And Trudy and Jack frequently find themselves flying blind. Probably the most frightening thing in the book is the realisation that the Tooth Fairy isn’t exactly the kind of person that we’ve been lead to be. Instead he’s an enormous man, squeezed into a rather stretchy tutu, which exposes his hairy shoulders. And he certainly isn’t collecting those teeth for the good of his health. He’s got a sound business model that allows him to make a handsome profit. And although I can’t tell you exactly what he’s doing with all the teeth, you’ll never be able to watch an Elton John concert in quite the same way again.

And if that isn’t bad enough Jack and Trudy also have to worry about what a single shoe lying in the middle of the road means. And for that matter they’re pretty sure that the dinosaur skeleton stolen from the Museum is going to turn up again….and that’s going to be very bad indeed.

But why do I want to be as brave as my characters? I know what you’re thinking, surely the author’s life doesn’t require a high level of bravery general? (It doesn’t most of the time, although it takes a very stalwart person to resolutely face up to a blank page with a deadline looming.)

Well, despite my nature inclination to cowardice, every now and again I find myself being forced toward bravery. Because someone comes up to me and says, “I read your book.”

And then I find myself gritting my teeth, girding my loins and asking “And did you enjoy it?”

And that’s a frightening question to ask – you can’t work on something for months and then not care how it’s received. But it’s a question I absolutely must ask it, because if you aren’t getting feedback and other people’s opinions – how are you going to get any better? 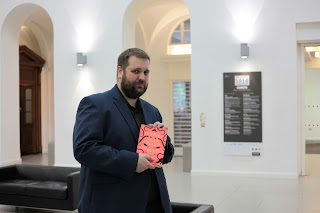 Of course, people are generally quite nice to your face. And even if they didn’t enjoy the book they’ll frequently try and say something non-committal like “It’s very different isn’t it?” Which is somewhat problematic for me, because my book is quite different. Basically it’s ‘conspiracy theories for kids’. It focuses on questions such as can Battenberg cake be used as a lethal weapon, why do vampires always wear black and what are unicorns doing with enormous horns in the centre of their heads.

So when someone tells me that they think the book’s “very different” I find myself having to be courageous again and ask “different good….or different bad”? Although generally when I ask that question they just stare at me.

Feedback is essential, especially if you have a different or unusual point of view. Because you’ve got to find out if you’re getting that across to the reader and the only way to find that out is to actually ask them. Which brings me on to my final point – how can you get the best type of feedback possible? My suggestion - try and get yourself an agent.

On television shows agents are always portrayed as venal, money grubbing and selfish. My personal experience is that they’re anything but. An agent is a professional reader who has more experience than you can shake a stick at. They’ll give you feedback on your work, tell you what’s selling in the market and make recommendations on other authors you should be reading. So if you think that you only need an agent to negotiate a deal you’re very much mistaken, they’re the best source of honest feedback and they’ll only tell you what you need to hear to make the book better. They’re as interested in selling the book as you are.

So feedback can be scary, but if you can find professional, impartial help it’s invaluable. Agents are worth their weight in gold. (Which interestingly enough means that the tall/fat ones are the most valuable.)