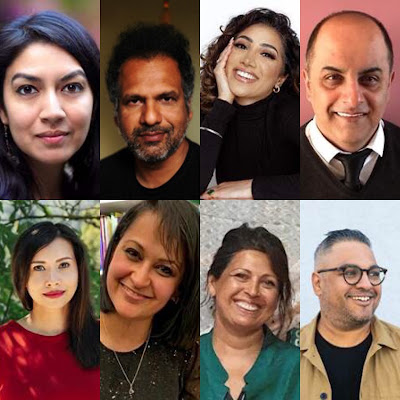 The DESIblitz Literature Festival 2021 is the UK’s leading South Asian Literature Festival. Opening in Birmingham City Centre on 18th of September with a string of leading British South Asian and South Asian literary stars, the festival, with a mix of in-person and digital events and runs until 1st October. All tickets are free apart from three headline events at £2.99 per ticket with Sathnam Sanghera, Nikesh Shuklaand a panel event on Cultural Representation in Literature. Live events will take place at the Rep Theatre and B Music (formerly Symphony Hall) in the city centre.

The festival is designed to encourage young and aspiring British Asian writers but is open to all. It provides a much-needed programme of author events, workshops, performances and panel discussions, showcasing the work of British South Asian authors and poets, and international writers with South Asian heritage. As well as aiming to inspire new creative writers, the festival  provides an opportunity to highlight the way writers of South Asian descent have contributed to the literary canon across the world.

A literary celebration unlike any other in the UK, the DESIblitz Literature Festival will showcase the work of 18 leading writers and thinkers of South Asian descent, alongside a series of workshops, panel events and poetry readings.

From the biggest new book releases, to up to the minute political debate, there will be events covering fiction, poetry, history, politics, diversity, erotica, psychology, science, art, and much more, that will inspire a love of reading in adults of all ages.

DESIblitz Literature Festival Director Indi Deol said: This is the third annual literature festival curated and produced by DESIblitz.com. As in previous years, the aim of the  festival is to provide a platform for new voices from within the British South Asian writing community, as well as feature existing British South Asian voices who are already successful as role models. As well as aiming to inspire new creative writers, it provides an opportunity to highlight the way writers of South Asian descent have contributed to the literary canon across the world. It has never been more important to showcase the incredible and multifaceted talent of Britain’s South Asian literary community.

Discussions on Diversity in British Publishing

Workshops to Inspire and Ignite

Workshops taking place in person at the festival include: Genre, Setting and Character led by Bali Rai the award winning children’s author,Writing Memoir led by Shyama Perera, Guardian and Channel 4 Journalist and author of three novels, as well as a South Asian Poetry Masterclass with acclaimed poet Rupinder Kaur - a Birmingham Panjabi writer and performer whose debut poetry book Rooh (2018) was published with Verve Poetry Press.

Highlights from the author programme include talks with the award winning Bangladeshi novelist and Granta Young Writer Tahmima Anam about her critically acclaimed 2021 novel The Startup Wife.

Bestselling author, journalist and screenwriter, Sarfraz Manzoor will be discussing his new book They: What Muslims and Non-Muslims Get Wrong About Each Other.

Nikesh Shukla bestselling author of The Good Immigrant, will talk about his new book Brown Baby: A Memoir of Race, Family and Home.

Social media influencer, podcaster and BBC presenter Anchal Seda will talk about her new book What Would the Aunties Say? A brown girl's guide to being yourself and living your best life.

Acclaimed journalist and author Sathnam Sanghera, will talk about his latest book Empireland: How Imperialism Has Shaped Modern Britain.

Successful self-published author Preethi Nair will also host a talk on how to get published called “Being Published - Traditional or Indie. The pros and cons.”

Writer-painter Amruta Patil is India's first female graphic novelist whose work sits at the cusp of ancient Indian philosophy and ecological-feminist stirrings. In 2017, she received a Nari Shakti Puraskar from the 13th President of India for “unusual work that breaks boundaries” in art and literature.

Kia Abdullah is an author and travel writer from London. Her novel Take It Back was named one of the best thrillers of the year by The Guardian.

Saima Mir is a British Pakistani journalist who grew up in Bradford. Her essay for It's Not About The Burqa (Picador) appeared in the Guardian and received over 250,000 hits online in two days. She will be talking  about her debut crime  fiction novel The Khan which is currently being optioned for TV.

An evening of Poetry on Sunday 19th will showcase the work of leading South Asian Poets including Founder of Kiota Bristol, Shagufta K Iqbal is an award-winning writer, workshop facilitator and Tedx Speaker and will read from her poetry collection ‘Jam Is For Girls, Girls Get Jam’, described by Nikesh Shukla as ‘a social political masterclass.’ One of the UK’s most exciting young poets and playwrights, Afshan D’Souza-Lodhi who is currently a Sky Writers writer in residence will read from her debut collection of poetry re;desire - longlisted for the Jhalak Prize.

In addition the world leading Pakistani poet Imtiaz Dharker whose work is part of both the GCSE and A-Level syllabus in the UK and has been described by Carol Ann Duffy as “If there were to be a World Laureate, then for me the role could only be filled by Imtiaz Dharker” will read from her extensive poetry collection.

The DESIblitz Literature Festival provides a much-needed programme of author events, workshops, performances and panel discussions, working with British Asian authors and poets, as well as those with South Asian heritage. The festival is designed to encourage young and aspiring British Asian writers, but is open to all.

DESIblitz.com’s first venture into literature events began with the production of a specific British Asian Literature strand for the Birmingham Literature Festival in 2017. The organisation then went on to produce a series of high quality, independent festivals every year since then. The festival in 2020 was converted to an online offer owing to the UK wide situation with Covid 19. The festival is grant funded by Arts Council England

DESIblitz.com is a non-profit organisation, dedicated to promoting South Asian literature. In particular we aim to make British South Asians and the wider Desi community aware of the huge catalogue of literature written by and for those with South Asian heritage.

The organisation increased its commitment to supporting creative practitioners from within the British South Asian diaspora with the launch of the dedicated online platform, DESIblitz Arts, in 2020.

DESIblitz Arts is focused on encouraging and showcasing submitted works produced by creatives that include short fiction and poetry which have a South Asian theme.

About Indi Deol: Festival Director and Founder of the DESIblitz Literature Festival

Indi Deol is the Founding Director of the UK’s largest online British Asian magazine DESIblitz where he leads on advertising, leadership development and strategic business growth. He also runs Aidem Digital CIC which is a Social Enterprise and digital media agency focused on delivering projects that produce a positive social return.  Indi sits on the board for Culture Central – which is the collective voice of the cultural sector in the West Midlands, the advisory board of Aston University Business School; he is a consultant for BFI Film Audience Network and he sits on the West Midland Combined Authority Cultural Leadership Board. He thrives on achieving success through utilising his digital skills to solve marketing and business problems. His education and background include a strong emphasis on fashion design, and over the last decade, he has been immersed in online media, and content marketing.

[QUICK NOTE FOR PEWTER WOLF: I would have posted this a LOT sooner but I, somehow, missed the email talking about this (new job, maybe having a cold, you know, that stupid thing called real life) so sorry for this going up so late but look at how cool it reads!)