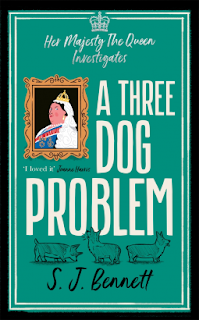 Here we are, the last of Shocktember (and am posting this within an hour of me writing this review - it's been years since I did that!!!). I honestly thought I would have read/audiobook more crime/thrillers, truth be told. But new job and less time to read (because of real life) has made my reading/audiobooking take a hit. I'm still audiobooking a cosy crime that I wanted to review for this month but I still have a good 20% left to audio. So, that's for next month, which is breaking my plans for a Halloween-themed reading month (more on that in a later post or two!)
But here we are with The Three Dog Problem, the second book in the Her Majesty the Queen Investigate series. Now, I read the first, The Windsor Knot, late last year. I did do a Mini-Review for it as, at the time, I was on my annual Christmas Blog Holiday/Radio Silence (which I might be doing again in a few weeks, FYI) and I found it fun! So, when I saw that this was up on NetGalley for review, I jumped at the chance!
Title And Author: The Three Dog Problem by SJ Bennett
Publisher: Zaffre
Bought, Borrowed or Gifted: eProof gifted by UK publisher in exchange for honest review/reaction.
In the wake of the Brexit referendum that has divided a country and the US election between Hilary Clinton and Donald Trump, the Queen just wants some peace and quiet. But, it looks like she's not going to get it as, when on a Royal visit to a Navy exhibitition, she sees a painting of the Royal Yacht Britannia on display. Her painting. And she gave no permission for its display. In fact, she thought it was misplaced in the mid-1980s.
As she begins to look into this, a body of a disliked housekeeper is found at the Palace's swimming pool, her ankle deeply cut, causing her to bleed to death. An accident, surely? But it's strange that her death happens as the Queen begins to look into the painting's disappearance and several of the female staff, including her trusted secretary, Rosie, receive nasty poison pen letters...
Something is going on in Buckingham Palace, and Her Majesty is determined to get to the bottom of it.
Am going to honest with you, dear reader: I am not entirely sure where I sit on this. I like this, but up to a point. There's several things that make me stop from enjoying this as much as I did with Windsor Knot, and the worst part is that I can't exactly put my finger on what the problem is.
It's annoying as I can't figure it out and I think I am going to continue with this series. I have plans to read book 3 when it comes out next year, so why do I feel the way I do with Three Dog Problem? The only thing I can think of is that this wasn't as fun as the first. The fun didn't exactly hit home for me. I like some of the issues and the characters that this book had (I love Rozie and I did like the Queen, but I like them the most when they were together and that wasn't enough for me in this book), but the fun and wonder of Windsor Knot wasn't here. I wonder if it's because it was trying to do too many things - poison pen letters, murder, stolen paintings. Maybe if one of these elements was removed and the story focused on characters a tad more, maybe it would have worked for me...?
Maybe it's because I was, at the same time of reading this, audiobooking another cosy murder mystery - The Man Who Died Twice by Richard Osman. Now, both of these are cosy mysteries and both tackle this subgenre in very different ways.
Like I said, I am going to read book 3 when that comes out. I am very intrigued to see where this series is going to. But this mystery didn't exactly work for me so I might not rush out to get my hands on the Queen's next mystery as fast as I would have...
Posted by Pewter Wolf at 21:00:00