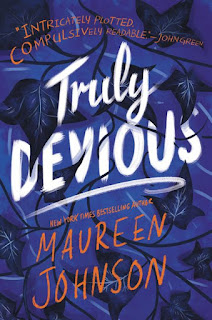 I knew when I decided to finally, finally, read/audiobook Truly Devious back in late July (I pushed to September due to me wanting August to be quite light and romantic reading...) that was I was going to do the series (this, originally, was meant to be a trilogy so on this front, I mean Truly Devious, The Vanishing Stair and The Hand on the Wall. I am intrigued over the newest, standalone instalment, The Box in the Woods, but in two minds if I should buy/read this. Let me do these three and then I’ll, then, decide...). Mainly because I own all three but, also, I knew that the main mystery of the series – the identity of Truly Devious and the unsolved kidnappings and possible triple murder that rocked Ellingham Academy in 1936 – was going to be an overarching theme for the trilogy.

Oh shoot, hang on. Let me get the basic info and and tell you about Truly Devious. Then we can dive into this!

Ellingham Academy is a famous private school in Vermont, where the best and brightest students attend, created by a tycoon who believed learning should be a game. But that's not why the school is famous. In 1936, the tycoon's wife, three year old daughter and one of the students vanished. The only clue was a poison pen letter-style riddle from someone calling themselves Truly Devious. It's one of the greatest unsolved mysteries in North America. Now, in the modern day, true crime aficionado Stevie Bell is about to attend the school and she wants to solve the crime. And Truly Devious doesn't like that...
From what I said earlier, the mystery of Truly Devious is going to be an overarching mystery of the series and, because of that, I knew that the mystery wasn’t going to be solved. I went into this with low expectations about what was going to happen. This was going to be set-up, the first act of a crime novel (crime novels, I feel, are split into three acts: build-up/incident, investigation, climax), the groundwork. And while it did do really good groundwork for the Ellingham disappearances and Truly Devious, I’m not exactly certain it did for Stevie, her new classmates and the modern-day Ellingham Academy. Everything modern day felt a little flat and not exactly fleshed out – which I’m hoping will happen as the story/series progresses.

This is the same with the modern day mystery, something I didn’t know we were going to get. I honestly thought this was going to be a cold crime mystery. The modern murder mystery, like the Truly Devious, wasn’t solved in this book, but things were left hanging, which makes me think this will, also, be solved at a later date because no way was it resolved at the end of the book. If it is, it’s dodgy as heck.

But am ok with the slow burn of the mystery. I think this is going to be the main reason I’m going to keep going with this series, I think. I want to know what happened in 1936 – I am invested in this case. That, the slightly sarcastic writing style of Maureen Johnson and me liking a few characters such as our lead, Stevie, her friends, Nate and Janelle, and the school’s Head of Security, Larry. I liked them hugely.

But, let me be frank, most of the book felt flat. Stevie, a character I liked quite quickly (and, though there is no evidence, I believe is on the autistic spectrum), didn’t feel fleshed out. Same with her best friends, Nate and Janelle, and her other classmates. They were there but felt very cardboard cut out. They were quirky, but not real. The same for the teachers, Stevie’s parents (oh, how I disliked them) and the Academy itself. Everything needs to be expanded more.

Same with the diversity. We have maybe one character who’s non-binary and maybe one character of colour, two at a push. I know one background character who wears a hijab who we see once, and then we never see them again. Same with LGBTQ+ characters. We see them once or twice, and then they are pushed into the background and for a selective school with a small student body, you would expected to see the diversity more in the foreground. (Ok, I’m being picky and maybe characters of colour and queer characters will be pushed more forward into the upcoming titles, but come on!)

And the romance. Or the starting of a romance. Ok, let me ask you a question: have you ever read a book couple, or see a couple together in real life, and you first thought is “Oh no. They shouldn’t be together. This is a unhealthy and possible toxic relationship”? Well, this is what I had with Stevie and David. I disliked David as soon as I met him and every time he did something, my alarm bells rang a little louder. Stevie isn’t perfect. She does dumb, stupid things and you going “Why?” but you understood why she did them. She didn’t think things through or she got caught up in the moment. But David comes across as an arrogant, compulsive liar. He lies throughout the entire book and there is one lie (yes, I get why he says it but still...) that I don’t think I can forgive him for. Not only because of the lie but the fact he used the lie to make Stevie feel guilty over her doing a dumb thing felt very emotionally abusive (and then we only find out that this was lie on the VERY LAST PAGE so no fallout till Vanished Stair).

Yeah, I am not a fan of the romance, unless Maureen Johnson is trying to raise awareness of toxic relationships – if so, good job! If not, then Maureen has to do HUGE character development and growth on both characters for me to be on board and to root for the relationship.

Truly Devious does have its faults. There’s no getting away from the fact that things needs to be fleshed out (hopefully, the later books will do this), but it’s a good solid to a three book mystery (like I said earlier, I am invested in what happened in 1936). I just hope that Maureen Johnson pulls this off and the payoff is worth it!
Posted by Pewter Wolf at 07:30:00