It Came From The Monster Belt 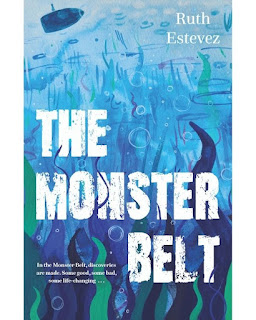 I have an extract for you! And yes, I am breaking my Shocktember (again) to share an extract!
Harris White is on a journey. A journey towards the mysterious Monster Belt. He thinks being there will be the key to solve a mystery that is so deeply rooted in his past. But for Dee Winters, she wants to get as far away from the Monster Belt as possible. So when their paths collide, will the two find the answers they re both so desperate to find...
I don't want to reveal too much as I sense that going into this blind will be the best port of call. So, before I share this little tease, I want to thank Graeme from UClan for allowing me to show this extract off!
If you are curious about The Monster Belt, pop over to uclanpublishing.com or visit Ruth Estevez's website, artgoesglobal.wordpress.com. Or, if you fancy saying hi to Ruth, send her a tweet at @RuthEstevez2.
Now, ONTO THE EXTRACT!
Reeds tickled Jordan’s ankles and he kicked; lean, tanned arms thrusting into breaststroke. As he broke through the lake’s surface and gulped in warm summer air, shouts and squeals greeted him. Standing on the wooden jetty, as if she were their football coach, Joanna, dressed in her signature red, shouted the loudest.

‘It’s Max next,’ she yelled. ‘Everyone else get back. Jordan left me in charge.’

Jordan waved from the water. ‘Do as Jo says; she’s my deputy.’

Joanna looked at him without smiling. He could tell she was on the brink of tears because no-one was listening to her. Only he’d be able to tell though. She’d always been good at hiding her emotions behind a tight mouth.

Spray erupted when his best mate, Max, hit the water. Everyone screamed and shouted, their feet thudding hollow on the bleached planks. The rowing boat tied to the jetty post swayed, a big whale- like thing none of them dared touch.

Jordan dropped his head back, soaking his brown hair darker and chilling his scalp. There wasn’t one single cloud, only the thickest blue all the way from the treetops and up to the Odda hill that swept along the perimeter of the valley. Two figures were visible on the top; two of the sixth-form girls who’d mooched past half an hour or so ago. He’d thought the ginger one was going to point to the rickety ‘No Swimming’ sign in the water and tell them to get out, but she hadn’t said a word.

‘I don’t care if we shouldn’t be in here,’ he thought. ‘What’s the point of having a lake in your village if you can’t swim in it on a baking hot day?’

‘Next!’ Joanna’s voice bounded over the water.

Jordan looked at the jetty to see who was at the front. Kate hardly made a splash with a vertical streamlined entry, so close to the jetty she could have scraped her back on it. Immediately, Sonny cartwheeled off the end. Fred and the rest of the littlies applauded.

Joanna stood with hands on hips. Her fallback pose. Callum leapt, cycling through the air. The littlies were standing in a clump, the front ones – with their toes curled over the edge – reluctant now. Joanna would wait for a suitable pause, pull down her prized shorts, flick them off her feet, vest top discarded to reveal an almost-identical scarlet swimsuit and then she’d dive – the only one apart from him who dared, probably making five somersaults before she hit the water. He wouldn’t begrudge her taking the limelight, everyone knew he was the best. Two of the youngest summoned up their courage, pinching their noses with grubby fists. Eyes tight shut.

Jordan caught a flash of light reflected in the distance. They must be water skiing over at Bridgecup. He strained upwards, palms flapping the water for a better view. The flashing reflection disappeared and, arms aching, he dipped below the surface for a moment to cool his face. He could do this every day. All summer after they broke up for the holidays, not just weekends. They only had another week to go. His dad said it was going to be the hottest summer on record. Yeah, right. His dad said that every year.

He resurfaced and from the jetty, Joanna shot him her defiant look. Everyone in the water turned to watch her; their shoulders like small shining boulders and sleek wet heads glinting in the bright sun. Jordan dipped under again. His ears filled with the gloopy silence of the lake. It was weird. He should resurface and watch Joanna dive her perfect line, but he’d seen her a million trillion times before and there seemed no need. He waited until he couldn’t hold his breath any longer before re-emerging to catch sight of the back of his friends’ heads. Silently, he slipped under a third time.

‘What are you doing?’ The words were as if someone else was speaking, not himself.

He hadn’t filled his lungs and he resurfaced immediately, opening his mouth too soon and gulping in water. Jo flashed red and small before he submerged again.

His chest tightened and a voice in his head whispered. ‘Why don’t they do something to help you?’

His feet clenched rigid. He couldn’t breathe. Dizzy, he panicked. Arms spread-eagled, he punched out his breath, only to gasp in air before descending again. This was serious. Beyond his control.

The lake gripped him, feet, legs, chest – and there was nothing he could do about the pain clasping his lungs.

‘Shout for help, you idiot.’

The words sounded distant. Not his. Not anybody’s. He reached up and readied himself. He didn’t care if Max and Joanna took the mick, he’d cry out this time. His head muddled sounds. Numbed with cold, he couldn’t move. Something touched his legs. He drifted down, gulping in water. It couldn’t be the Mere Monster reaching for him. It was only weeds. Don’t panic. He paddled, circling his legs as if climbing a ladder that wasn’t really there. Breaking through the surface, he opened his mouth. Breathe in, then you will be able to shout. Max was laughing at him. That voice in his head. Max, Max! Help. Give us your hand. Max turned and yelled something at Joanna as Jordan slipped under again. It struck him that they couldn’t tell he was silently crying out. His lungs filled with the lake. He couldn’t remember what he was supposed to shout any more, and his words drifted away. Legs hanging straight, arms heavy, he sank deeper . . .

‘They’ll grab me in a second.’ The voice sounded hopeful.