My first Guest Blog (kinda)! Am quite excited! And over an awesome idea from Rhys from Thirst For Fiction. Cover Chat is a "multiple-blog feature (or meme) where book bloggers talk about US vs UK book covers." I think it's a cool idea and if anyone wants me info (or fancies doing this with Thirst For Fiction, click here!)

So, Rhys and I did two of these. One of his blog (about Wintercraft by Jenna Burtenshaw) and one of mine. And, on mine, we are doing Virals by Kathy Reichs!

So, here is the UK Cover: 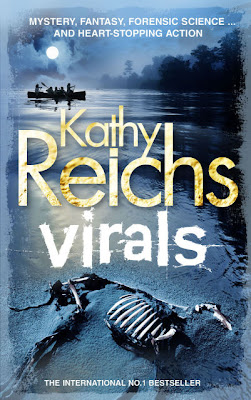 And here is the US Cover: 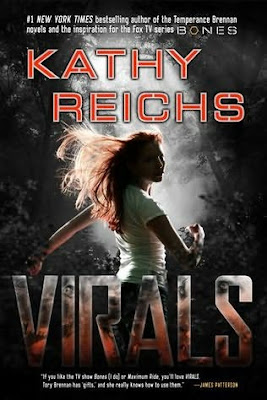 And now, our views and opinions of these covers.

Rhys say: When I received Virals from Random House, it had the US cover on it of a girl running away in a forest- and I assumed this was the UK cover also...but apparantly not. What I liked about the US cover was that it was very dynamic- and it reminded me a lot of the Maximum Ride covers, which also often feature a girl...and judging by the fact that they feature a James Patterson quote, they are obviously appealing to fans of Maximum Ride (of which I used to be one until I re-read the series and saw how Patterson had wrecked the great concept it began with). The US cover was one of the things that sold it to me, and I'm not sure I get quite the same vibe from the UK cover- it just doesn't have that dynamic of fluidity that the US one has...it looks more static somehow (probably because they're sitting in a boat rather than running through a forest!) that being said, I do think it is a good cover. The skeleton on the UK cover also gives a somewhat clearer definition of what Virals is about...but the blending with the rest of the image seems a bit hap-hazard to me, so I've going to choose the US cover as my favourite :D

I say: I like how both covers are similar to the Kathy's adult books, even though this is meant for a YA audience. Same typeface used for the author's name, same style of cover art. But I think the little differences help keep the two series seperate. It's interesting to see how each cover touchs on an element used within the book. The US has a fast, actiony scene that grabs and holds the attention. Who or what is the girl running from? Whereas, the UK cover focuses on the mystery side of the story, choosing dark sombre colours. Seeing as I haven't read Virals (unlike Rhys - jealous as hell, I am!), I can't say which best suits the story. So, I have to go on which grabs and holds my attention. I like the UK cover with its mystery, but the US cover has an edge to it. If the UK had the US cover, but with the UK typeface, the Uk publishers would be on a winner with me. But this time, I prefer the US cover.

I wanna give Rhys from Thirst For Fiction a quick shout out and thank you for allowing me take part in this. I would LOVE to do it again (just saying...)
Posted by Pewter Wolf at 17:45:00