An Evening With Darren Shan! 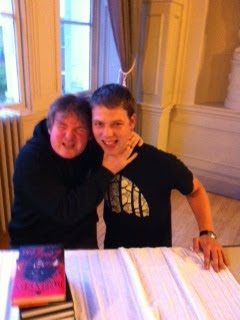 (AKA How I Held Up The Line [Again] And Got Strangled By The Author... No, Seriously...)

After a chilling reading from Lord Loss (one of my faves, FYI!) in where the mircophone choose that moment to turn itself on (and scare everyone witless followed by laughter!), Darren (or should I call him Mr Shan? Not sure.) explained why the Saga of Larten Crepsley was never meant to be a series. He said that in The Saga of Darren Shan, he left Larten Crepsley's history vague and when he was writing the Demonata, he started thinking about his past and wondering what made Larten Crepsley the vampire he was when Darren (and us) first met him in Cirque du Freak. He revealed the title for book three and fourth (& final) titles in the series: Palace of the Damned and Robbers of the Dead (can I say I love his titles?).

After a quick reading from Ocean of Blood (which makes me want to read the book!), Darren answered a few questions from the audience. There ranged from "Why do you kill children off in your books?", "Why is the main character in the Saga of Darren Shan named after you?", "Which is your fave book?", "How long does it take you to write?" (Three to four weeks and about 2 years to edit - INSANE, right? But he does work on several novels at one time. At the present moment, he is on book 8 or 9 in a new series!), "Do you get sick of writing gory scenes?" and "What scares you?" (the answer to that was surprising. He was scared of spiders, hence why he wrote Madame Octa). 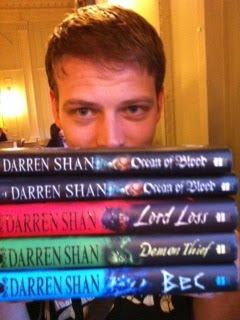 After a short reading of his World Book Day novellla Koyasan, everyone lined up to have their books signed. And after having a moment of panicking about me bring a few copies of my books (Three, if I'm honest with you but I only really ), I saw other people with their whole collection of The Saga of Darren Shan, Demonata or his adult novels, I felt less panicky. And what was more brilliant was the group in front of me and the person I went with (aka The Person I'm With) had a photo with Darren Shan. The group had a little boy with a cuddly toy and, in the pic, Darren strangled the cuddly toy. Not idea why, but I found it super cute (see, I have a heart under my cold, blogger skin...)

And then, my turn. As Darren signed the books, he asked if I had a question I wanted to ask him. Now, as I write, I should have asked about how he got his literary agent or his publishing contract, right? Nope. Instead, I asked "Was there any scenes that your editor or publisher thought was too gory and asked for them to be toned down?". He answered with "Yes, in the scene of Lord Loss I read out [end of chapter 1, start of chapter 2]. The parents were switched because the mother was, in the drafts, on the roof. The publisher thought it was too much, so I switched the parents about. So, do what you want to the Dad in writing, but tone down the Mum. Also, the publishers are a tad funny with sex." He explained about ideas he had in Vampire Mountain, one of them being that there was going to be gay vampires (as they are very few female vampires). But, he said "Am choosing my battles carefully..."

Can I say now, if Darren writes a bloody yet sexy sex scene that people will freak out about (like the birth scene in Breaking Dawn or True Blood standards), I would happy buy several copies of that book!

All in all, I had a great night! Darren was brilliant with everyone and that was great! I do hope his hands aren't aching due to all the signing he did!

So, thank you to Darren Shan for coming to Essex. Thank you to Just Imagine to setting up the event! Thank you to Tiffany McCall (Publicity Executive @ HarperCollinsChildren's Books UK with a dangerous sense of humour) who did a tweet that made me burst into fits of laughter (see below)! And thank you to The Person I'm With for coming with me, even though he knew NOTHING about the author. That's twice I did that to you... 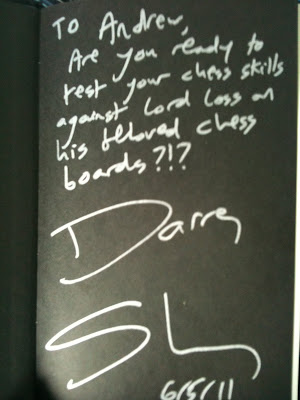 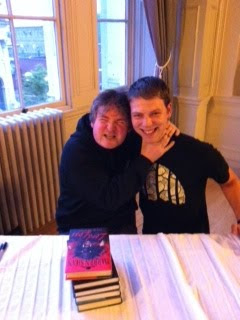 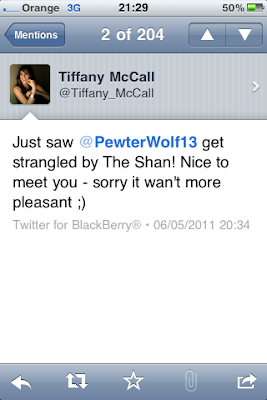 SURPRISE! I thought that, as I was going, that I would give you a treat. That's right... I managed to nab myself a signed copy of Ocean of Blood and I have decide to give it away to one lucky winner! Do you want to win the book that left The Book Zone breathless and awaiting his next fix of Darren Shan (review here!)? If you have a UK address that I can send to, then YOU CAN ENTER! All you have to do is fill in the form and GOOD LUCK!