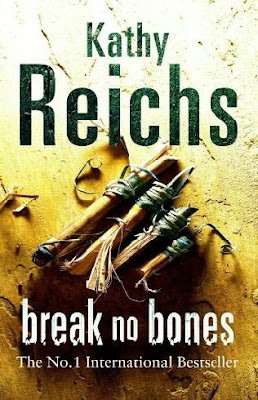 As you guys know, I am a bit of a crime nut. Even though I like reading them, it's rare that I do as I have a stupidly HUGE amount of YA books (and soon, a ton of eBooks). So, I kinda rely on audiobooks on the crime front of late.

So, Break No Bones. Where to begin…? Dr Temperance Brennan is on an archaeological field trip, working on a prehistoric graves. It's on the second-to-last day when a body is discovered… that isn't prehistoric. As she helps Emma Russo, the distant's coroner and a close friend, in the morgue with the bones, Emma suddenly collapses. Helping out her friend, Tempe slowly tries to figure out the identify of the body. And then a second body is dicovered…

With her husband in the area to investigate some legal matters and then, days later, her on-off partner Andrew Ryan on the scene, things get complicated. But when a bullet hits one of them, Tempe begins to wonder if someone is trying to stop her from discovering the truth. And the closer she gets to it, the more disturbed she gets. So much so, it changes her views on humanity. That is, if she lives long enough…

Right, before I get into how I feel about the story, let's talk briefly about the narrator. The narrator changed. From Bones to Ashes, Linda Edmond read the books. But this is a read by Dorothy Berryman (and Break No Bones is the book BEFORE Bones to Ashes). So, to listen to some books in the series and have the narrator change is a bit jarring so it takes you longer than before to get used to the narrator. But I never warmed to her. I found it really hard to relate to her, but like I said before, I relate Linda Edmond's voice as Tempe's voice in my head so it was going to be hard for like this new reader. There was times, though not often, I felt that Dorothy didn't "get" the story.

Speaking on the story, it was an gripping. Not as intersting as Mortal Remains (aka Spider Bones) or some of the other Temperance Brennan novels, but was still a gripping to listen to. I think I have read another novel (by Tess Gerristen) which touchs on the same subject at Break No Bones so it was interesting to see how these two authors tackled this subject.

I always read somewhere that Kathy Reichs previous novel, Bare Bones, has been considered by fans as one of the worse books in the series, so I suspect that people who have read the whole series love this book because it was better than that. I felt like that with several series hence my reaction.

So, basically, Break No Bones is ok. Not great but not awful. Will be intrigued to see what Kathy Reichs does next with Tempe in Flash and Bones, which will be out on 1st September 2011. Knowing my luck, will crack by then and read her first EVER YA book, Virals.
Posted by Pewter Wolf at 20:57:00