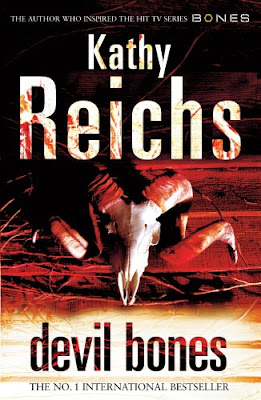 As you guys must have suspected, I am a bit of a Kathy Reichs nut. And, with work allowing iPods to be used (I love my temp job for this reason!), I listen to audiobooks that I haven't listened to.

Devil Bones was one I started but never finished. I forgot I was listening to it, I think. And then I accidently dropped my iPod into a bucket of water (the mini-heartattack I had when that happened…) meant I lost my place and had to start from the beginning.

Doctor Temperance Brennan is called to a basement of a house that held a secret room. A secret room filled with signs of the occult. Pagan statues. Two cauldrons filled with dirt. A saracified chicken. A human skull. As Tempe begins to investigate, a headless body washes up on the shores of a lake. Carved into the dead body's chest is a penagram and the number 666. Are the two connected? Is this linked to the dark side to a regilion people know very little about? Or is something darker going on? As the media go into a frenzy and an ouspoken religious policitian makes his views heard, Tempe is pushed to her limit. One false move and her career will be over. One false move and her life might be over…

Not sure where to start with this write up. It's not one of fans faves (the worst for them is Bare Bones - a book I haven't read or listen to so I can't comment on that), and I can understand why. It's a lot to get your head round. Tempe has to research and understand a regilion/s that she (and we) don't understand. And, at the same time as that, we are trying to figure out what happened to the skull and the headless body. Almost, we have to worry about Tempe's lovelife (don't ask) and people's reactions to the outspoken policitian who is stirring up trouble for her and her case. It's just a LOT to take on board!

I kinda liked the idea of Tempe trying to understand non-mainstream religions. Even though I can't remember half the names, I found that interesting and I sense Kathy Reichs must have enjoyed researching and writing about the religions she touches on in Devil Bones. When she was asked to write an episode for BONES (a TV show which was inspired by her books and that she is Executive Producer of), she wrote using this as a starting point. The episode in question is "The Witch In The Wardrobe".

Another thing I felt was done right was the media. As Tempe said, if we don't understand it, we fear it. And the media hypers up the fear and the outspoken policitian (a horrible person, in my honest opinion) speaks his views which hypers up the media more and that, in turn, scares its viewers. We seen that happen in real life over the past few years, in both good and bad events. Swine Flu, Bird Flu, terrorism, Prince William and Catherine Middleton's wedding, etc. The list is endless.

But I can kinda see the problem with some fans. It feels very tried-and-tested. Although there was new elements to this story, you kinda got the feeling that it was repeating itself. Tempe gets a case that mysterifies her. She works through it. Get results. Gets it wrong. Gets it right. Her life is in danger. She's saved and the case is solved. The pattern is there - it just feels a tad samey in places.

But you can turn that round and go "The series is a successful because of that. If it aren't broke, don't fix it.". And that's probably why Moral Remains feels refreshing. It's the same pattern, but there was something different in the mix. Her life wasn't in danger at the end of the book, but someone she cared about…

I love the reader of the audiobook - Linda Edmond. She just seems to gets Tempe's humour. And that probably one of the reasons I enjoyed listening to this audiobook. The reader seemed to enjoy reading the book. I have come across a few audiobooks where the reader doesn't really care about the book and, because of that, the listener doesn't enjoy the story.

Now, what to listen to now: Another audiobook that I listened to AGES ago (like "Break No Bones", "Sabriel", "Priestess of the White" or "Fallen" to name a few), start listening to an audiobook I started but never finished ("Dead To The World") or to snoop on iTunes and Audible to hunt out new (and hopefully, exciting) audiobooks? Decisions, decisions…
Posted by Pewter Wolf at 08:00:00