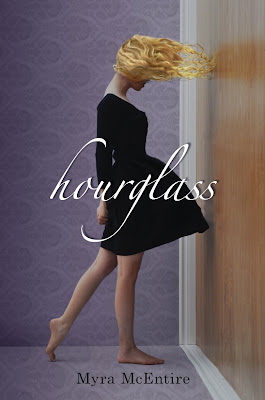 I discovered Myra McEntire via Twitter (again!) and after getting excited over hearing it tackles time-travel (or time-slip), I ordered it from the states (the wonders of Book Depository, as this book hasn't got a UK publisher) and waited till I found time to read it. And before long, I thought "Am reading this now!"

Emerson is seeing people who aren't there. Swooning Southern belles. Soldiers long forgotten. A jazz trio playing on a piano. Unsure what they are, she tries to cope the best she can. All she wants is to be normal. To forget that she was sectioned due to depression (caused by her parents' death) and just cope with life the best she can. So when her brother tries one last time with a consultant, Emerson decides to give it one more try.

She didn't expect her consultant to be Michael from the mysterious Hourglass. He's a year or two older than her, and seems to believe every word she says. And when they touch, sparks seem to fly. Literally.

So, why is this happen? And why does Michael believe her?

Now, this is a very different read for me. I'm not to describe this as a thriller/mystery or a time-slip novel as this fit in both. A thriller/mystery as the story adds questions and twists so you never know where you were going and when you did think you got what was going on, the rug gets pulled from under you. But then, as you have a time-slip, when the twists came, you were thrown as you never saw them coming. Hell, you never knew that the ideas could exist and then, Myra would explain it in such a way, you go "Oh. Okay. That makes sense." and you continue without questioning it. 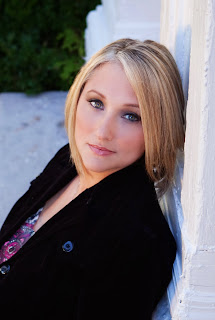 Now, I would like to chat about the relationship between Emerson and Michael. But I won't. Nor will I touch on Caleb (says nothing), but I do want to write quickly about Emerson. She is kick-ass. Her humour took some getting use to, but she is one kick-ass female lead. In one of my fave scene, she threw Michael over her shoulder - and it was a proper karate move. And she didn't just do that move for the first time. She has been taught (and is a brown belt, if I remember correctly). What I'm trying to say is, even though things are happening to Emerson that are out of her control, she isn't waiting for someone to save her. She's saving herself and others around her.

I found Hourglass an interesting and a quite original debut novel and I'm sure there will be a sequel (there BETTER be! [EDIT: There will be. And it's called TIMEPIECE]), so hopefully, by then, Myra McEntire will have a UK publisher...

And now, for book trailer and my song choices. ENJOY!