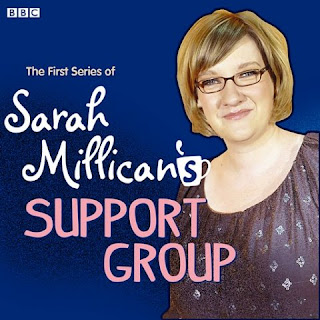 This was a random purchase as I kept listening to the 30 seconds teaser on iTunes for this and Sarah Millican’s Support Group (which came from this “pilot”, and I use that term loosely) and I found both the teasers funny. Also, I saw her on TV shows and I found myself laughing my head off so I felt I had to purchase this (and after listening to the first hour of Vampire Academy, which has a HORRIBLE READER and I can’t face listening to her, I needed something light!).

Originally aired on BBC Radio 4, Sarah Millican chats about her divorce and, how when this happened, her finding a councillor. Well, two. The first was shocking and the second who Sarah just clicked with. And with, she created a character called Jean, a relationship “...who is so good that most people don't come back after one appointment with her.” During her annual appraisal, Jean discusses her clients, her husband and the importance of pictures from Google of animals wearing clothes...

It’s a short, but quite funny half an hour, though there are moments where you do go “ah. This does feel like a pilot episode” as there are times you do feel out of sync with it. I have listened to the first series of Sarah Millican’s Support Group (am writing the review) and I feel that this is for the die-hard fans. If you’re a casual fan or curious, just go for the series.

Now, to get you through this lack of review (and seeing as this was mention on several occasions), I hope these pics help you smile...