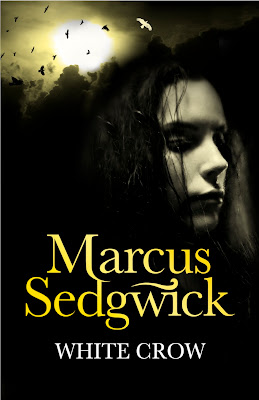 Let's chat about Marcus Sedgwick. As you know, I recently reviewed Marcus' latest novel MIDWINTERBLOOD and from that, I discovered that Marcus is adapting his novel, My Swordhand is Singing, into a stage play (was quite excited about that - make it come to London or Essex!). But, randomly, I discovered that the film rights to another novel of his, White Crow, has been snapped up and will begin filming as early as NEXT YEAR!

Hypable exclusively revealed the press release and it makes VERY interesting reading! Here is it in full:

WHITE CROW is a psychological thriller that centers on a 16 year-old girl who moves to a sleepy seaside town with a deadly past, and discovers what’s on the other side of death.

KK&P plans to shoot the film in the fall of 2012 on Isle of Man, located within the British Isles.

The author, Marcus Sedgwick, has been nominated for the Carnegie Medal, the Edgar Allan Poe, and the Guardian Children’s Book Prize.

WHITE CROW marks Kami Garcia’s entrance into the world of film and television production. While some Young Adult and Adult authors are currently producing their own novels, Garcia is not only producing her upcoming solo novel Unbreakable: Book 1 in The Legion Series from Little, Brown (also with Mark Morgan and KK&P), but other film and television properties as well.

But I love this news! Can't wait to get my teeth into this...!

Also, random add-on and not connected with Marcus Sedgwick, is the movie vision of Cassnadra Clare's City of Bones. It has been revealed by Hypable & Mundie Moms that Marlene King is writing the screenplay. For those of you who are wondering, she is the showrunner for the Pretty Little Liars TV series! So, hopefully, the film will start getting filmed soon!
Posted by Pewter Wolf at 13:45:00