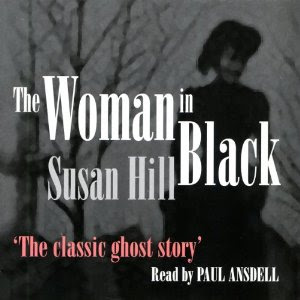 I keep seeing this on the iTunes audiobook chart for quite some time. I know it's a West End show (which is quite scary from what I've been told), and there's going to be a movie out next year starting Daniel Radcliffe. But, apart from that and knowing it's a ghost story, I knew nothing about it. So, on a random, late night impulse (always seems to be the case with me and audiobooks), I downloaded it and listened.

Arthur Kipp is a young solicator, asked to go to the funeral of Alice Drablow and then go to her house, Eel Marsh House, a house that stands next to the windswept marshes beyond Nine Lives Causeways, for legal paperwork. While at the funeral, Arthur sees a woman in black, watching the funeral from a distance. An unnatural feeling of unease comes to Arthur. And then, he decides to stay at Eel Marsh House to deal with the large amount of papers. It is here, when terrible things happen…

I listened to this audiobook in two sittings and I can stay that this is quite chilling. It's very much an old-fashion ghost story but there is something completely unnerving about it! It's probably how the story is told - through Arthur writing to feel himself from the demons of his past and because of that, you get caught up within his fear, panic and possible paranoia.

Not sure if I want to relisten to this on Halloween (although I would like to, just to scare myself), and I think this reading would be perfect to be played on BBC Radio 4 or BBC Radio 4 Extra on a dark stormy night near or on Halloween.

I know Susan Hill has written two more ghost stories - The Man In The Picture and The Little Hand - but from all the reviews I've seen, this is the best and scary story of them all. And if you want an old-fashioned scare, this is for you.

And because of this, I might try and see either the film or the West End show (which, I heard, is terrifying!)...