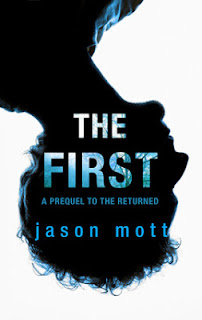 I thought I would bring my Kindle Month a week early. And when I read this, I thought this would be a perfect start.

So, The First is the first prequel to the novel The Returned by Jason Mott (which should be out in September). And The Returned has already got a bit of hype around it. Brad Pitt's production company won a bidding war to turn it into a TV show and ABC has asked for a pilot (the show will be called Resurrection). So don't get confused over it with The Returned, Channel 4's french zombie thriller.

The First follows Emily. It's been a year since her fiancee Edmund died in a suddenly bus crash. It's been nearly a month since she's taken off her engagement ring. She's trying to move on. Expect one morning, Edmund walks into work like nothing happened...

This is very fast read. It took about half an hour to read the short story and then an extra 15 minutes to read the sample of The Returned. And it did seem to be a taster for the novel to come (and with the fact there is two more eNovellas to come: The Sparrow being released next Monday and The Choice being released on the first of August, which leads to the book's release in September) and, because of that, a tiny part of me thinks this is a very clever advertising campaign. And you can't fault the publishers for doing this, as it's a very smart/clever way to promote the book.

But my feelings on this: it is a short story. There was very little dialogue (which I love) and not much emotion (but this is a short story so what do I expect?). But here's the big question: will I read The Returned? Answer: I'm not sure. I have been rejected by the US publisher to read this on NetGalley (dare I ask the UK?) and while I am very intrigued over this novel, I might have to read The Sparrow and The Choice before I make my final decision.
Posted by Pewter Wolf at 07:30:00