GoodRead - The Night Itself 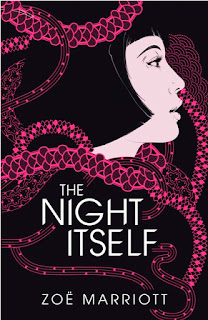 I have to let you guys into a secret. Earlier in the year (late March, early April), I (along with a few other very lucky book bloggers) received a very early and very exclusive ARC from Hannah from Walker Books. She asked, nicely but firmly, to keep this book a secret till we were given the OK to share. A month later, she said "Ok, share. But no reviews". And we did. And now, if you are reading this, she's given the OK to share our thoughts with you guys.

And that book was The Night Itself, the first book in Zoe Marriott's new trilogy, The Name of the Blade. And I read it within days of me receiving it.

I know. I am THAT bad a person.

So, the book. When Mio steals her late grandfather's katana - a priceless sword that is meant to be keep hidden at all times - all she was doing was livening up her fancy dress costume. Not unleash an ancient evil, determined to get it from her at all cost, onto modern day London! And now, not only has Mio started to be stalked from creatures from mythical Japanese myths, she somehow unleashed a mysterious warrior that wants to save her and keep her safe. But Mio has to figure it out. Figure out the katana's strange powers. But lives are on the line, and she seems to be only one worthy enough to save them...

Am going to get straight to the point on this: I ADORE THIS BOOK!

I just fell for it, hook line and sinker. I kinda guess I would but I didn't expect I would so quickly and get so addictive over it till I did. There was one point I took this book out to my local coffee shop with my other half (he had his iPad). I got so sucked into the chapter I was reading, I didn't hear him ask me the same question several times before he had to poke me in the arm. That was how absorbed I was in this book and I don't think I've had that feeling with a book for quite a while. To vanish from the world.

As I read this back in April and several months have passed, I can't remember if I had any issues with this book, but OH! The Questions! I have questions which I hope will be answered in the next two books in the trilogy. And AT LAST, we see characters that the author didn't have to spell out the sexuality or skin ethnicity. She didn't have to use a sledgehammer and drum the point home! She treated her readers with respect and for that, Zoe, I thank you.

I thought while read it back in April (and still do now) that if you are a fan of Cassandra Clare's Mortal Instruments and/or Infernal Devices series, that you might want to check this book out. Just... trust me on this, ok?

PS - I'm sorry but whenever Mio thought of her katana as "Mine", I always imagined Gollum saying it in my head. Preciousssss....