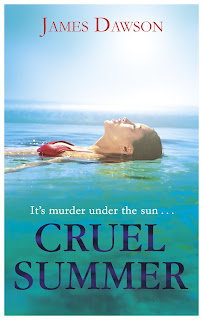 As you guys are probably aware, I'm a bit of a fan with James Dawson. Last year, he wrote one of my fave books of 2012, Hollow Pike. And this year, his second novel is out. And that is called Cruel Summer.

But does it live up to my high expectations?

Janey fells to her death. Suicide, the Police said. One year later, her friends - Ryan, Katie, Ben, Alisha, Greg and his current girlfriend, Erin - go on holiday in Spain, all bar Erin (who met Greg months later) hoping to put the past behind them. That is, until Roxanne Dent crashes the party and throw out a shocking confession: Janey was murdered and she has proof.

The events that follow throws doubt on everyone in the villa. One of the them is a killer and not all of them will survive the Spanish sun...

I loved this book. I think this, dare I say it, is better than Hollow Pike. A huge statement to make, I know, but I devoured this book within 3 or 4 days. It was addictive reading!

Does anyone remember Point Horror from the 90s? Well, imagine that with a teen drama (The OC, One Tree Hill, Gossip Girl, etc) and make it British, and you have what Cruel Summer is about. I'm not sure how else to describe this. Although I haven't watched it, am pretty certain you guys who have watched the Scream movies will love this book because it's very similar. Murder! Doubt! Chatty humour! Even cattier characters! Tongue firmly in cheek!

So, did I guess who the killer was? Kinda, but I was always unsure of myself. I kept jumping between two and three characters. But when it was revealed and why, I was SHOCKED! I was speeding through the last 100 pages going "WHAT?! HOW?! GET THE HECK OUT OF THAT VILLA!!! RUN!!!"

This book would be PERFECT for a movie (hint hint Film4/Kickstarter). And as someone who HATES reading/watching horror, I would go see this!

Oh dear, this is turning into one of those gushy review but I loved this book! If you are a fan of Scream or like the idea of a "What if Point Horror had a child with TV's Gossip Girl?", this is the book for you.