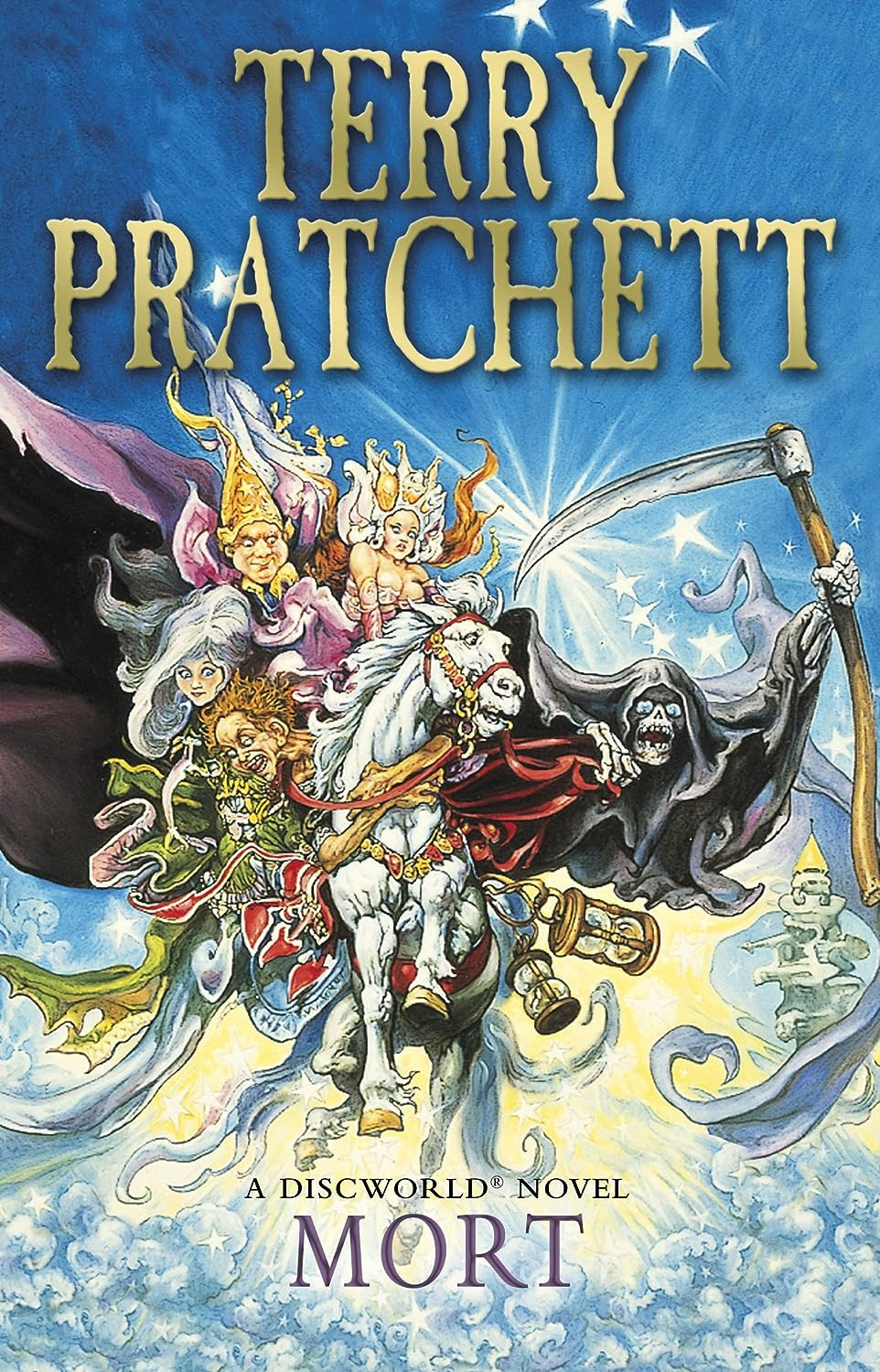 A few years ago, I did a readalong with Stevie of SableCaught fame of Murder of the Orient Express by Agatha Christie on Twitter. We planned to do a video on her channel and talk about our reactions to the book, so we met up, did the video (which has NEVER SEEN THE LIGHT OF DAY because of the audio. And hopefully, because of this, we will NEVER SEE IT! EVER!) and chatted about Discworld as I was curious on the series and wondered where I would start. Stevie said this was the book to start, even though it's the fourth book in the series.

Death comes for us all. But when Death came for Mort, he offered Mort a job. What could possibly go on? A lot, is the answer. A lot.

Ok, I am going to start with this point before I go any further. I HATE THIS COVER! HATE IT HATE IT HATE IT!!! I know why this is the cover and I get why you lovely people love it but, in my opinion, it's awful. I trying to understand why Keli is wearing very very little - so much so that her boobs are going to pop out any second. I don't like how Mort is drawn. What is up with his neck. And with up with Ysabell? Where is Ysabell's body and isn't both Mort and Cutwell meant to be in their late teens/early twenties? And don't get me started on Death!

*exhales loudly* Sorry. I had to get that rant out of my system! I really dislike the cover, in case you didn't guess...

Ok, my reactions to the book. I am a tad mixed on this book.

My main reason, I think, is because I had such high expectation over this series - I mean, it's one of those series that everyone who reads adult fantasy read and love. So, the bar was always going to be high and, of course, the book was never going to reach my expectations.

But it's an interesting read. And an odd book.

For me, this is a good book to start with the Discworld series as the first half of the book touches on the weirdness of Discworld and, once the world is explained and the story gets on its feet (around 100 pages or so), I liked it. It wasn't what I was expecting.

Death is a character I love. As weird as that makes me sound, he intrigues me. He's a walking contradiction. He shouldn't meddle in human lives, and yet he finds us fascinating. He likes cats and has a horse called Binky. Oh, and he has an adopted daughter.

Yeah, this is the Grim Reaper as we know him.

I think tht's one of the reasons I liked this book. This book - ok, this series from my chats with "real" Discworld readers - takes fantasy very seriously. And yet, because it does, it knows where the humour lies. Its tongue is firmly in its cheek without making the world seem ridiculous or unreal, even though the Discworld is unreal and ridiculous.

But, like I said earlier on, I had high expectations over this book and it's my own fault that I didn't like it as much as I hoped. BUT I'M NOT GONNA GIVE UP! I won a beautiful hardback edition of Reaper Man and I have plans to read that and maybe one or two more Discworld books. When I feel brave enough to tackle them...
Posted by Pewter Wolf at 16:00:00