If I Made The Movie Soundtrack Of... A MONSTER CALLS 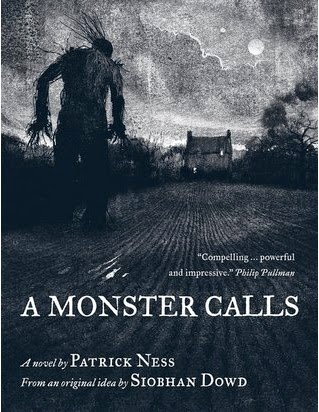 So here we are. The final blog post in my trial in this weird idea where I wondered "If this book was getting turned into a movie, what would the soundtrack be like it I was in charge?". I have done Night School by CJ Daugherty and Broken by AE Rought. And now, the final post - A Monster Calls by Patrick Ness.

This idea came very soon after me reading A Monster Calls last year. I was so amazed by the book, when the idea came to me, I was very excited. I was putting songs in my head and was going "Yes! This is a song from Before. And this would fit her and that would fit the grandmother and the Dad!". But a week or so afterwards, I thought "No, those songs won't work. I want something... something... more." And that's when I hit this idea and as soon as I hit it, I get even more excited by it!

And yes, I know A Monster Calls is being turned into a movie and I know that the soundtrack will sound NOTHING like mine, but it's a fun idea and I want to stick to it!

I wanted songs that had no singing. I wanted instrumental. Yes, I know that would make it a score but what if it went over all genres? Classic, pop, electronic? What if you used each genre of music to represent something? Can you imagine what the themes of each story would sound like if you had one was in the style of russian folk when the second was indie?

And each artist only had to do one track and focus on one moment or one idea instead of doing the whole album? Each song would be different because it would be done by a different artist, each person with their own unique view on the story...

But trying to find a good mix of musicians that "fit" A Monster Calls and the idea I had in my head are two very different things, so it would be an open thing where everyone could submit their track and the best would be chosen (which is how it should be. Not how famous the name is but the music itself). I do have some musicians in mind, but it would be HIGHLY unlikely that they would do it so... LET'S PRETEND!!!

ALEXANDRE DESPLAT
I love this man's music. Whenever I listen to him, I always find something new and with each score he conducts, he always seems to do something new and exciting. It's always different from his previous score. I think he would be wonderful in doing a piece about the Yew Tree...

IMOGEN HEAP
I am a sucker for Imogen Heap. I admit this, but she is very talented a musician. And when she releases her albums, she also release what her songs would be like if they were instrumentals. Like Alexandre DeSplat, I can very easily see Imogen doing a song about the Yew Tree...

MURRAY GOLD
Before you all groan and go "No! Not the Doctor Who man!", here me out! Over the course of the modern, the music has always been strong. And when Murray is allowed to flex his music muscles, he can make the audience get more into the scene and get them on the edge of tears... With A Monster Calls, I want to music to do that: suck you into the story and put you onto the edge of tears...


DISPARITION
Some of you guys might know these guys via that wonderful podcast, Welcome To Night Vale. They make and share music which have a creepy and, at times, sinister undertone but you don't notice it until you pay attention. And with A Monster Calls, I feel this is kinda a must.

Also, what do you guys think of this idea? I did 3 post on "If I Made The Movie Soundtrack Of..." as a trial and I do like it. It was weirdly fun and it's nice to return to music and going "That song goes well with this book!" as I feel I haven't done that in a while...

But do you guys like it? Do you guys want me to do more of these? If so, which books do you think I should try? Leave a comment or tweet me (@PewterWolf13) and let me know!!!
Posted by Pewter Wolf at 12:00:00

Email ThisBlogThis!Share to TwitterShare to FacebookShare to Pinterest
Labels: A Monster Calls, If I Made The Movie Soundtrack For..., Patrick Ness