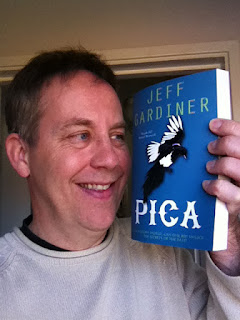 Today, I would like to welcome Jeff Gardiner to the blog. His novel, Pica, follows Luke, who prefers the world of computer games than the world around him. But when enigmatic loner Luke enters his world, Luke begins to get caught on a path that might change his very existence...

I just want to thank Jeff for wanting to pop on the blog and wanting to chat about computer games vs nature. Now, let me throw it to Jeff!

In my new YA fantasy novel, Pica, teenager Luke begins the novel obsessed with violent computer games and hating anything to do with ‘boring’ nature. His favourite game, ‘Organik Apokalypse’, allows him to fulfil certain self-obsessed fantasies. Flying towards a planet he notices how its rainforests are teeming with an abundance of creatures:
An eco-system of such incredible biodiversity deserved just one response. I pressed the button to release a monstrous tongue of napalm flame.
Trees blazed into an inferno immediately: miles of forest wiped out in a single blow. Creatures stampeded in swathes. Clouds of birds erupted into the air, fleeing the conflagration; some already ablaze or singed. Then I carefully aimed two nuclear missiles with such accuracy that they blew away all visible greenery, and using heat-seeking weaponry I chased and finished off the dwindling flocks of birds – picking off stragglers one by one. I waited until the entire landscape to each horizon became a black desert of ash before landing my ship.
In place of the rainforest Luke builds a gigantic city – a megalopolis.
What once had been jungle, river, and plains was now filled with shining towers and concrete blocks. Cities soon joined together to make mega-regions, until the entire planet became a mass of concrete; one giant urban conurbation ready to be filled with humans who would bow down to me as the master of their world.
At first, Luke is an angry teenager, reflected in the game he’s addicted to. There’s an interesting debate here. Do violent computer games inspire further violence in their players, or can playing them become a cathartic experience, helping to express anger vicariously? The answer to this probably depends on the individual, to be honest. It harks back to the arguments about heavy metal songs inspiring suicide (or not), and whether violent movies spark off copycat killing sprees. It’s my opinion that those individuals had psychological problems that could have been set off by anything. To blame a piece of art seems naïve to say the least, and I’m not a great fan of censorship.
As a teacher and parent, however, I would argue that children are susceptible and more easily influenced, so there should be age restrictions on some games. It seems, from my experience talking to younger teenagers, that many of them play on games and watch films that are certified 18 anyway. I guess that comes down to parenting, which I have no intention of commenting on. I’m still learning how to be a good parent, myself.
I have played games like Grand Theft Auto, which made me smirk and giggle inanely for a few hours, but I have to be honest that I also began to feel a bit guilty about the morality of killing mindlessly and stealing cars. I’m okay because I can differentiate between fantasy and reality while understanding what is acceptable behaviour in public. But can everyone else? Can all children? Something deep inside me still sits uncomfortably.
In our Western culture we are becoming horribly dependent upon modern technology. I worry about my children and what experts call ‘screen time’. How many hours each day should children be allowed to spend behind a screen? How will it affect their health and mindset? It’s something I’m sure all parents worry about.

In Pica, Luke hates country walks, and he’s not too impressed when his parents take him on a ramble in a local stretch of outstanding natural beauty where they are excited about identifying a rare flower:
Watching my parents stroll off hand in hand, I waited until they were out of sight, then I stepped over towards where the precious orchid displayed its colours in the midst of the browned grass. Standing directly over it, I undid my flies and directed my spray of streaming yellow liquid over its blossom and leaves. The orchid immediately flattened as several petals dropped off.
‘Not so pretty now, eh?’
As a child myself, my parents took me for lots of walks in the countryside: forests, lakes and hills. These walks inspired me to take an interest in birds, wildlife and the world around me. There’s nothing quite like a walk in the rugged outdoors.

So Pica is my response to young people who tell me that nature is ‘boring’. No it isn’t. Our planet is awe-inspiring and filled with ancient mystery. Humans used to live close to nature and their lives fitted around the rhythms and patterns of the natural world. There must be ancient magic and secrets that have been lost over time. Pica is set in the modern world and it explores the idea that we can rediscover those ancient mysteries. Luke’s life is blown apart when he realises what amazing secrets are contained within nature…
His enigmatic friend, Guy, shows Luke some amazing creatures and aspects of the natural world, which gradually convince Luke that perhaps nature is worth exploring. At one point he says to Guy:
‘I didn’t realise such amazing things happen all around us every day.’
As a teacher and author who visits schools, it concerns me that many teenagers take little interest in the natural world. When I talk of the sense of wonder experienced when walking in the Lake District, or the feeling of awe I’ve felt when diving, or touring through the wilds of Kenya, it’s often met with indifference. How many children and families visit the countryside or go on walking holidays these days? I live close to downs and a huge forest, but I often get blank looks when I mention them.


The times when I most feel alive are when I’m walking in a forest, on a hillside or by a lake. It’s difficult to explain to someone else the thrill of seeing a murmuration of starlings, or of sailing on the ocean alongside a breaching whale, but these moments affect you in ways you can’t easily express. Scientists are realising that contact with nature and wildlife can benefit mental health by inducing a feeling of positivity about our own existence and place within the natural world. You want magic and secrets? Things to blow your mind? Get away from those screens and go and experience nature first-hand. I guarantee you won’t regret it.
Posted by Pewter Wolf at 07:30:00