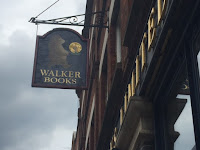 This weekend just gone, I was invited to Walker Books for their #InkSlingersPicnic blogger event. And as you guys know, I always love a good blogger event and, barring a few other publishers, I love Walker Books so I had to go. I HAD TO GO! They tempted me with delicious books, cupcakes and a chance to meet up with other bloggers/vloggers. IT'S BEEN SO LONG, YOU GUYS!

So after meeting up with Michelle (Tales of Yesterday) and Virginie (Chouett) near Tottenham Court Road (SO CLOSE TO CURSED CHILD!!!), we made our way to Walker. After meeting a bunch of other bloggers and vloggers (who are WAY cooler than me on this whole blogging thing), we went inside Walker, said hi to everyone else and got shown some wonderful new releases that Walker will be publishing throughout the rest of the year. 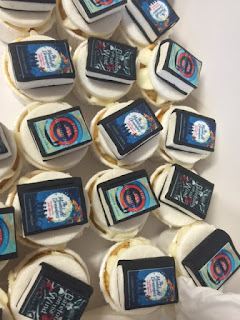 Three authors were at the event and each spoke of their releases. And I'm sure one of these will be perfect for you.

The first was Siobhan Curham. You might have heard of her - she was the editorial consultant on Zoella's Girl Online and author of books such as Shipwrecked, Dear Dylan and True Face. Her latest, Moonlight Dreamers, follows four friends who, meeting by chance, form Moonlight Dreamers and each girl has to become herself with each other's help, while tackling issues such as racism, bullying, sexuality, bereavement. These girls aren't like anyone else - and nor do they want to be. Fans of Girl Online will devour this book and be desperate for the sequel...

The second was Zoe Marriott. Yes, you know who she is as I rave about her books that I have read (still got two to read at the moment!). Her newest will be out in September and it's called Barefoot On The Wind. Set around 100 years after Shadows on the Moon, everyone is Hana's village know to stay away from the forest. Hana knows that better than most. But when her father goes missing, Hana doesn't hesitant. Into the dark forest she goes, and what she finds isn't what she expected. Described as a feminist reimagining of Beauty and the Beast, this is one that I think fantasy fans will be itching to read. I know I am...

Third and final was Lauren James who talked about the final book in her The Next Together duology: The Last Beginning. Sixteen years ago, Katherine and Matthew (our leads from The Next Together) vanished without a trace. Now, Clove wants to find them. But where do you start, when it looks like the couple were reincarnated in key moments in history? Who are Kate and Matt? And who is Ella, a girl who appears wherever Clove goes? Time travel, mystery, love (both straight and gay), this book ticks all the boxes for me. And if you don't know this series, there is a free novella out now (which I am reviewing in a few days time, actually), Another Together, that is perfect for you guys to start with...

Ok, now we have those out of the way, let's chat about a few other books/series you guys might want to investigate. 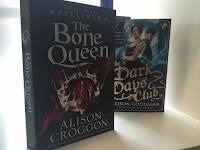 A few years ago, Walker published the Pellinor series (The Gift, The Riddle, The Crow and The Singing). So now that a prequel to this series, The Bone Queen, has been published, Walker are republishing the series with new editions. Now, I have read The Gift so many years ago, but I can't remember a thing about it. Now I have it on my kindle, I think this will be perfect for me and for those of you who love authors such as Garth Nix, Trudi Caravan and Lord of the Rings.

Here I Stand is something that, as soon as I heard it, I knew I wanted it. Endorsed by Amnesty International, this collection of short stories and poems explore the freedoms and rights we enjoy in the 21st century - and those for which we still need to fight (such as racism, freedom of speech, gender equality, surveillance and identity to name a few). And with contributors ranging from Neil Gaiman, Sarah Crossan, Sita Brahmachari, Matt Haig and Chris Riddell to name but a few, this book is perfect to start a conversation, a debate, a change in view...

My Lady Jane: The Not Entirely True Story is as mad as a box of frogs. No, seriously, I mean it. When I first saw the cover in my info pack, my first thought was "Well, this looks like something I will avoid like the plague. It's a bit... girly", but once Walker got talking about it, I got excited. This book is barking, and perfect for me! Imagine the story of the Tudors retold by Monty Python and throw in some shapeshifter and you get the idea. After Henry VIII turns into a lion (making him the Lion King! LION KING!!!), Lady Jane Grey is pushed into a marriage with a total stranger - who might be a shapeshifter who turns into a horse - she finds herself caught up in a plot to rob her cousin, King Edward, of the throne and forcing her to be Queen. Like that can go wrong... right? 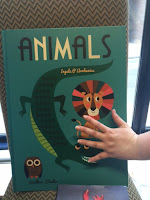 Beck is also one that you might want to keep an eye out for. This story follows a mixed race Beck who is shipped to Canada at the time of the Great Depression. Faced with cruelty and hardship, Beck travels to find comfort and encouragement, eventually finding Grace... It's hard to talk about this book as I think this will be a book that will shock and move you. Started by Mal Peet and finished by Meg Rosoff (who promised her friend to finish the near complete manuscript before he died), this book will stay with you long after you turn the final page...

And final (I can go on, but am going to stop with this), we have The Singing Bones by Shaun Tan. This will be the first book from Walker's new imprint, Walker Studios. In it, we have beautiful art from Shaun inspired and based on the Grimms' Fairy Tales. With forewords by Neil Gaiman and fairy-tale scholar (you can be a scholar in fairy tales!? Boy, am I in the wrong job!) Jack Zipes, this looks like a feast for the eyes.

I could go on with books - The Secret Horses of Briar Hill by Megan Shepherd (and illustrated by Levi Pinfold) sounds enchanting and the Mango and Bambang series sound perfect for young readers aged 6 and up, and let's not get into the beautiful collectors edition of A Monster Calls, which will have exclusive content from not only Patrick Ness and Jim Kay but also from the actors and director if the upcoming movie (we rematched the trailer and I got a little teary eyed). 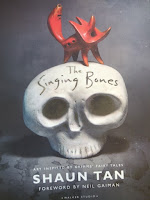 Walker looks like it's going to publish a nice mix of books for the next few months. I can't wait to get my reading under way!

Thank you to Walker for hosting a wonderful event with cupcake, authors and me shout of shock/delight when I saw Where's Wally colouring books (I kid you not! I grew up with Where's Wally?), my horror when I discovered Jill Murphy's classic Five Minutes Peace is having it's 30th anniversary (meaning I am a year older than this book! I GREW UP WITH THIS BOOK, PEOPLE! AND IT'S NEARLY MY AGE!!!) and having nearly everyone gasping in horror when I said I still hadn't read The Sky is Everywhere by Jandy Nelson (so much so, one of the editors [whose name I completely forgot but who is a hoot!] grab a spare copy and threw it into my hands, going "Now you have no excuse...")
Posted by Pewter Wolf at 21:43:00