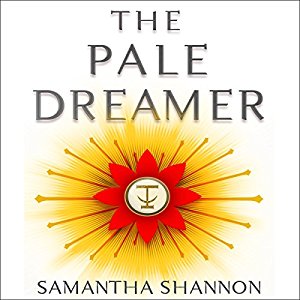 My first review of 2017 and I didn't read it this year. I audiobooked this just before Christmas so I can't count this towards my British Books Challenge for this year.

When Midas PR asked if there was any audiobooks that I wanted to listen to last month, not only did I ask for Lauren Graham's Talking As Fast As I Can (check out my review for that here), I also asked for The Pale Dreamer as well. It's a prequel to the Bone Season series and I have them on my TBR shelf and I REALLY want to try and read them this year (I admitted that I haven't read this series on Twitter and a few people - mainly @Chouett and @empireofbooks - were so shocked that they ordered me to read this series. Chouett even sent me a paperback copy of Bone Season she had spare (thank you!). I will try to read Bone Season. I will try! HONEST!

In this prequel to The Bone Season, we enter the world of the Scion London, where being clairvoyant is forbidden and punishable by death. Sixteen year old Paige Mahoney is a clairvoyant and works with one of the most powerful Mime Lords, Jaxon Hall. When a violent and dangerous poltergeist is let loose, this could be Paige's chance to join Jaxon's gang, the Seven Dials. But the dark clairvoyant underworld play by its own rules and if Paige isn't careful, her first mission might be her last...


This might not have been the best way for me to enter the Bone Season world. It is a prequel, but I got the definite feeling that this was written for fans of the series. There were things mentioned and referenced and I was going "Wait, what? How does this work? Why does this happen?".

Once i found my stride (going to say Chapter Two), I enjoyed myself. It was fun, fast and it was a nice introduction to the world that I have always wanted to read but kept putting off for one reason or another.

I do have issues. It's not perfect. I did struggle with finding my place in the story. For the whole of chapter one, I did have to keep going "who? what? huh?" because things weren't explain (again, this is more a novella for the fans than newbies).

Also, I wasn't a fan of the audiobook's reader for a good chuck of the story. It took me a while to warm to her voice and how she read the story. But the end, I enjoyed listening to her, but it took a good amount of time before I clicked with her.

This is a novella for fans of the series, not for people curious over the world, but it has wet my appetite to read Bone Season sometime this year. I am a bit overwhelmed with books on my TBR so bear with me!
Posted by Pewter Wolf at 16:00:00