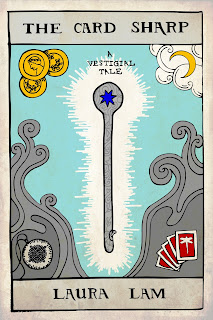 Anyway, The Card Sharp. The fourth novella in the Vestigial Tales collection, a collection of short stories set within Laura Lam's Micah Grey trilogy, this follows Drystan before he became the White Clown at R.H. Ragona's Circus of Magic. Here, he's a Lerium addict struggling on the streets of Imachara. But when a mysterious woman gives him a new life, Drystan jumps at it without a second thought. But when he did, he fell into the dark underbelly of the capital, Ellada, where he has to sell Lerium to powerful men and women while battling his addiction. But while at a high stakes card game, Drystan sees something no one else did: a man cheating the cards...

I forgot how much I enjoy this world. It's been a while since I read Laura Lam (though I do have her adult novel, False Hearts, on my TBR) and I forgot how much I like the world of Micah Grey. And this felt like returning to a very old friend. While I don't remember all the details of Pantomime, it was nice to revisit characters (well... a younger version of Drystan).

Because this is a novella, it is a fast read (I took my time and read it over a course of three days, starting on New Year's Day). But because it was a novellas, there were elements I wish were exploded further (maybe they are in the novels but I haven't read them yet!) or felt a little too easy. For example, the novella takes place over a course of several months, maybe a year, but Drystan's addiction felt skimmed over. It was there but we didn't look too deeply into it. Maybe this will be looked at in Shadowplay or Masquerade - like I said earlier, I haven't read them (I was going to but the first publisher of the series, Strange Chemistry, went busted and it took some time before the Laura got picked up by her current publisher, Tor, for not only this series but her adult series).

Perfect short for Micah Grey fans to tie them over till Masquerade comes out later this year...
Posted by Pewter Wolf at 07:30:00