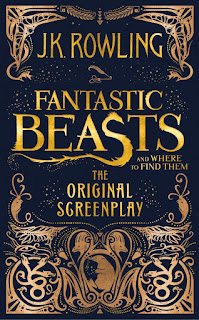 Another "I Read This Before Christmas 2016 so I can't Count this as one of my British Book Challenge 2017" books. Oh well... I can imagine Michelle from Tales of Yesterday (and person in charge of BBC 2017!) going "ANDREW!!!".

But look, I wouldn't be a good Harry Potter if I didn't read this. Though I admit I felt icky watching the film over the casting of [insert actor name here] to play [insert character name here] but of events that happened last year. Yes, I saw the film and yes, I still feel unsure on if I did the right thing seeing the film and supporting [insert actor's name here]. But I wanted to see if I could separate the actor from his work... Am in two minds over if I can do this or not (seeing as I wasn't a huge fan of the actor before the news broke last year so... not sure...)

I'm not going to review the movie. Because I can't 100% remember it. I did like the movie, but there were problems, which I will touch upon further down.

Set in 1920s New York (set several decades before Harry Potter), we follow Newt Scamander as he entered New York. It was only meant to be a brief stop. But when his case is misplaced and some of his fantastic beasts escaped, Newt has to stay and find them.

But something dark is stalking the streets of New York City... and it didn't escape from Newt's case...

Comparing this to the Cursed Child script, I think I preferred reading this screenplay script more (and while I enjoyed watching this, I think I prefer watching Cursed Child more, though there are huge problems with the story with both. Both aren't prefect, let me make that clear. NEITHER OF THESE ARE PERFECT).

Let's get this out of the way: this does feel like a first-time scriptwriter writing a script. Yes, I know that this is JK Rowling's first script (she admits that she asked a lot of questions to Steve Kloves who wrote all bar one of the Harry Potter films) but the plot felt predictable. We've seen this plot before. (I watched a video review where the movie was compared to the X-Men movies [link to that video review is here]). There were elements that were meant to shock or surprise us but these kinda feel flat. To most readers and viewers, these reveals could be seen coming a mile away.

Also, there's the romantic. Well, one romantic. Newt and Tina Goldstein. This felt awkward and it didn't ring true. I know this is the first in a five movie series so we have time for character and emotional development but this felt off. Now, canon-wise, fans know they get together, but it felt false somehow. And this is problematic because at the same time as we have that romance, we have another romanic playing out which is Tina's sister, Queenie, and the Muggle/No-Maj (really dislike this term), Jacob. Now, Queenie and Jacob's relationship, I was totally on board with. Watching their relationship on film and reading it in script, I was shipping them SO DAMN HARD! So, why did I feel like this with Queenie and Jacob, but felt out-of-sorts with Newt's and Tina's.

And Graves. Oh, the ending of Graves. I think that needs to explained more as it's left unfinished. And we have no idea if we are going to return to this in later movies or not. But yes, there were things that need tying up.

EDIT: Another thing that has occurred to me after I wrote this review and put in my scheduled (working about a week or two ahead of self at time of writing) is that this script is exactly like the movie. There is no deleted scenes or extended scenes that were edited down. We got no extras. What you read is what you saw.

However, saying that, I really liked this. This felt like a Harry Potter work. This felt like a JK Rowling story, and I missed this. I struggle with JK Rowling writing as Robert Galbraith (so much so, I have decide not to continue reading the series) and Cursed Child caused problems with canon. But watching this and reading this, it felt like I had truly returned to this world (I felt like this at the start of Cursed Child, but that feel left me very quickly while reading).

I like how we are now exploring the wizarding world. Yes, there has be problems with this with Pottermore and some of the information they have revealed, but this felt more inline with what we learnt within the Harry Potter novels.

While I wasn't in board with Newt and Tina's relationship, I did like their characters. I like Newt's awkwardness and I grew to like Tina (but I did struggle with her. She was a hard character to like). Jacob and Queenie I adored. I didn't realise that I would love them as quickly as I did. Queenie took me completely by surprise but I ADORE her! And Jacob is us - a non-magic discovering the world and I liked him very very quickly.

The character I thought I would like but didn't was Madam Picquery, the head of MACUSA (Magical Congress of the United States of America). I don't know why but I always thought I would warm to her but watching her character, I didn't click with her like I hoped. But Picquery isn't Fudge and that I liked. I liked that we had a strong character in charge and I hope we are going to see more of her in future films. 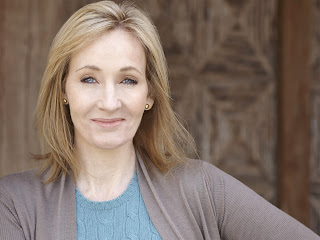 The characters I liked hugely. The Niffler especially. I think everyone is in love with the Niffler. I was given a Funko Pop of the Niffler for Christmas. But I found the beasts we did see fascinating. I want to know more about them (highly unlikely that we will see them in next few movies but a TV Series would be awesome!)

Oh, before I sign off, this is written as a screenplay. It's in script form (like Cursed Child) and it is exactly like the movie. But I liked reading this as a screenplay. It added texture and, plus, I have never read a novelisation of a movie which felt right or true to the movie. Give me the screenplay from now on!

This is a mixed bag but I think I will continue reading the screenplays of future JK Rowling scripts/movie in this series. Or I might start reading more screenplays in future. It's an intriguing medium to read and I would like to dip my toe into this world more often in the coming months/years...
Posted by Pewter Wolf at 16:30:00