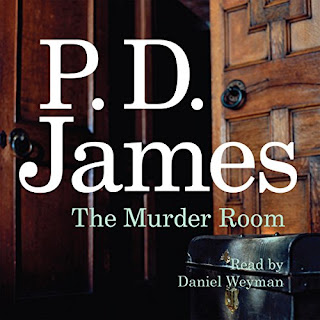 I'm surprised that this is the first review am writing for the new Pewter Wolf. As you know, from my Sit Crooked And Talk Straight post, the last few months have been a bit of a struggle so am trying to find a new medium of writing the blog and having fun with it, so am trying things out. The next few months are going to be very trial and error.

But this is a book reviewing book, so I should write a few bookish things on here, right? Something to reflect my, hopefully, new change in direction. Something fun, light, hopefully in these dark times, something - *checks notes* - nope, let’s talk murders, shall we?

Commander Adam Dalgliesh knows of the Dupayne Museum in Hampstead. He took one of his friends there one Friday. He knows about niché museum’s commitment to preserve the history of the interwar years, including its sinister murder room. Now, he and his team are asked to investigate the murder of one of the trustees. Petrol was thrown on him and his car and set alight. With news that the this trustee was refusing to sign a new lease, meaning the museum would close, it now looks like his death was targeted.

But what makes the murder more creepy is how similar it is to one of the murders in the Murder Room. A coincidence? Or is the killer using the Murder Room for inspiration and, if so, what murder are they going to do next…?


You would think, on the surface, this wouldn’t be my cup of tea, would you? It’s an old fashioned, slower read and more on the side of literary fiction than crime/thriller.

And I agree with you. It doesn’t fit my crime/thriller reads, which are much more fast paced and follow the lead detective and his team throughout the book. But here, the book is a lot slower in pacing, the writing is more literary than thriller and for the first few hours of the audiobook, the book follows the suspects, not Adam Dalgliesh. He’s in for a few chapters, then vanishes till the first murder happens, then we’re with him and his team throughout. 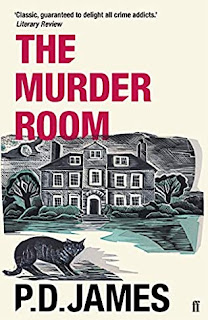 I mentioned that this is a slower in pacing than I am used to. Now, this isn’t a bad thing, for the most part. This is good as it helps the readers get under the characters’s skin, get the atmosphere and sets the tone and tension. However, at times, it felt longer than necessary and could have done with a tad moire tightening. Plus, the book touches on issues such as elder loneliness, isolation and others that were looked on, touched on, briefly but never examined. I guess the reason for this is because Dalgliesh, his team (and readers) are only here to investigate and solve the murder. Once done, we leave and the characters are still left with their situation.

I did like this once it found its feet (For me, it was a chapter or two before the first murder was discovered) and I did guess the killer and motive (though I can’t be sure if I guessed it or if I watched the BBC’s 2004 adaptation and vaguely remembered. I’m going with the forma as I watched a clip of it and I remembered NOTHING!), but there’s something about this that felt, a little, like sinking into a hot bath. I can’t explain, but this felt like an old-fashioned detective story and, at the same time, feels a little modern. It’s not modern enough for my tastes (all characters felt very white for my taste), but the old fashion feel felt lovely to audiobook as the months begin to get darker earlier.

I do have a few other PD James on my kindle (which I sense will be a very different experience compared to me audiobooking The Murder Room), but I am going to try them in the next few months if my brain wants something a little slower in pacing, but am glad I finally tried a PD James as I’ve been wanting to FOR YEARS but been chicken to.
Posted by Pewter Wolf at 08:00:00