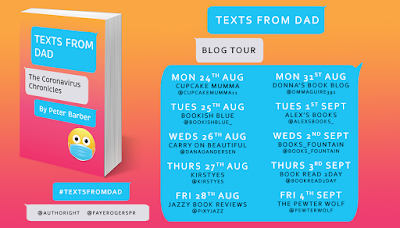 BLOG TOUR ALERT!!! And it's a little different from my normal as this is for a non-fiction title.

I know, what have I become?!

Anyway, I was asked if I wanted to be involved in this, read the blurb, laughed and said yes very quickly.

Texts from Dad is a collection of daily texts sent from a father to his daughter, detailing 57 days of lockdown due to COVID-19. And then, these texts go viral...

Of course I had to say yes to be involved in this blog tour! I mean, come on!

Now, I have a guest post from Peter Barber, texter at large, chatting about this book as I am thrilled to be sharing it with you guys! But, before I do, I just want to thank him for writing this post. I, also, want to thank Blue from Kaleidoscopic for asking if I want to be involved in this tour!

Ok, with all them out of the way, OVER TO YOU PETER!


The British Prime Minister Boris Johnson told us all to go home and isolate. Only go out for essentials, and one walk a day. Used to a hectic life of rushing around London every day while running the family business I found myself spending too much time looking out of my window at home and realised that if this were to continue, I would be likely to get used to it and start dribbling. I have always been a writer and published a book many years ago, which did quite well, but my recent stuff was just the odd comedy article here and there.
This book started accidentally when I decided to write a daily text to my daughter with my personal observations of the coronavirus pandemic from my own experience and news reports. I wrote a lot about my obsession of trying to roast her family Guinea pigs as a new BBQ ingredient. Putting on weight because of my passion for beer and complaining that my clothes were no longer fitting because of my newly discovered bellies.  I really wanted to make her laugh. After the first day it was clear that I had succeeded as she shared the article on social media and sent me a never-ending stream of comments from all over the world insisting that I continued. I was having fun; my daughter was laughing every day, so I carried on.
Being a good cartoonist, she began to produce a daily cartoon relating to the subject of the day. So, this turned into a family project. I would write my stuff; she would produce a drawing to match and all placed on a daily blog. After a while we were receiving messages daily and people were sharing.
Every day I would sit down with my phone. I would have no idea what to write until I started tapping at the keys, then it would all come together. I would sit back and read while giggling at my own work. Although I had just written it, I had not read it. I know this makes no sense, but it did to me then. I would then send it over to my daughter, who would rustle up a cartoon before posting it online.
When the lockdown ended, my daughter announced that she had kept all the posts in date order together with her drawings and had presented the entire manuscript to a publisher who agreed to take it on. The book was born, and I didn’t even know I was pregnant. 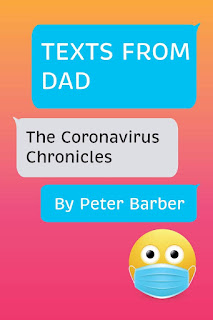 I have a strange affliction that I see humour is everyday situations. Sometimes I stare at the radio in disbelief while listing to a particularly stupid government announcement. This is just accepted by most and not questioned, but when I point out the other side, it becomes comical.
Humour over the years has changed. We no longer tell jokes. We don’t laugh at people slipping on banana skins anymore. It has become more subtle. Comedy now is the slow realisation of the funny side of a situation and our realisation that it applies to us. Comedy has become clever, and it takes us by surprise.
I thoroughly enjoyed creating this book and hope you enjoy reading it as much as I enjoyed writing it.
This was truly a family project. My wife would read the texts and offer suggested improvements. My daughter would throw ideas and draw the pictures. People reading it on social media had fun and shared it with their friends. Slowly laughter diluted the fear a little, and I hoped that I helped in some small way.
Coronavirus caused misery for thousands of people and continues to do so throughout the world. Life has changed for all of us. But we still need to laugh.
Posted by Pewter Wolf at 08:00:00