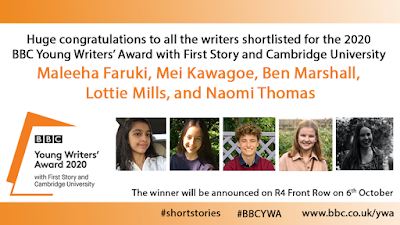 From the tender relationship between a boy and his grandmother inspired by family experience of Alzheimer’s, to a feminist reclaiming of the Greek myth of Persephone; from the memory and stories of a first-generation Indian immigrant, to a celebration of ‘otherness’ and the transformative power of difference, via a darkly comic exploration of humanity in a crowded tube carriage: the five sophisticated stories, penned by writers aged 15 to 18 were praised by the judges for their ‘startling confidence’ and ‘deeply impressive’ range of subject matter and style.

Practising for GCSE English Language papers inspired two finalists to write, with one, Ben Marshall, never having written a short story before outside of the classroom. The shortlist also sees the return of 2018 finalist Lottie Mills – a second-year English Literature student at Cambridge University – for her ‘genuine triumph’ of a story inspired by her #OwnVoices experience of disability and her frustration at how difference is represented.

Now in its sixth year, The BBC Young Writers’ Award with First Story and Cambridge University 2020 is open to all writers between the ages of 13 –18 years and was created to discover and inspire the next generation of writers. It is a cross-network collaboration between BBC Radio 4 and Radio 1.

“Congratulations to our five shortlisted writers and thank you to everyone who entered the 2020 BBC Young Writers’ Award. This year has been an unsettling one for young people and writing has proved a powerful way to explore complex feelings and emotions. Gaining insight into the minds of teenagers and what they care about through their writing has never seemed so vital. I hope this year’s entries will inspire others.”

Thistleton is joined on the judging panel by: Laura Bates, Sunday Times bestselling author and founder of ‘The Everyday Sexism Project’; screenwriter, novelist and YA Book Prize 2018 winner Will Hill; winner of the Branford Boase Award and shortlistee for the YA Book Prize 2019 Muhammad Khan; and poet, critic and journalist Bridget Minamore.

The five shortlisted stories, each under 1000 words, will be read by actors including Hollyoaks and Derry Girls actor Dylan Llewelyn, The End of the F***ing World actress Jessica Barden, and comedian and actress, Nimisha Odedra and broadcast by BBC Radio 1 and available on BBC Sounds. They will also be available to read on the BBC Radio 1 website. The winner will be announced live on BBC Radio 4 Front Row on Tuesday 6 October.

The BBC Young Writers’ Award has a reputation for identifying the short story stars of the future. Shortlisting for this prize is a stepping-stone for writing success, with one of Lottie Mills’ fellow 2018 cohort, Reyah Martin, winning the 2020 Canada/Europe Commonwealth Short Story Prize aged just 20. In 2019, inaugural YWA winner Brennig Davies secured a place to study English Literature at Oxford University and won the coveted Crown literary prize at the Urdd Eisteddfod – a Welsh language cultural festival.

“Congratulations to the shortlisted young writers this year. What they have achieved is totally impressive - sophisticated dexterity, finely tuned sensitivity and a bold engagement with contemporary issues all stand out strongly in these stories. It’s warming, too, to see that creative writing in the GCSE curriculum has been a starting point for some of them, something it is important not to lose as schools concentrate on curriculum recovery this year. This years’ shortlistees are clearly all very committed writers and have great writing careers in front of them.”

“The BBC Young Writers’ Award is such a crucial way of identifying and amplifying the voices of some of the UK’s best young short story writers. This year’s shortlist reassures that the form is alive and well with the younger generation. The stories reveal how some of today’s most challenging contemporary issues are feeding these young people’s imaginations and how, through writing and reading, experiences of hate, horror, frustration and despair can be transformed into sites of hope, humour and aspiration for a future this generation want to create, not just inherit.”

‘Winds that Travel Across’ by Maleeha Faruki:

Over the course of a car journey, a father shares his memories of childhood, joys and hardships in India and the reasons he came to Britain. From frozen mountain peaks, to bustling bazaars and kitchens thick with the scent of lamb broth, this ‘effortless’ story was inspired by ‘people’s views on immigrants during Brexit’, a desire to reflect the stories that define us and the importance and humanity in individual experience.

In a highly imaginative and ‘fiercely evocative’ feminist retelling of a classic myth, Mei, whose writing has been performed at the Royal Shakespeare Company’s The Other Place, gives voice and agency to the kidnapped Persephone in this ‘visceral’ and rebellious story. Poetic and dream-like, it exposes societal constraints and the lessons girls are taught during childhood: to play small, be nice and not ask for more.

A ‘beautifully observed’ and ‘bittersweet’ story about family, loss and memory, Bingo Tuesdays was inspired by Ben’s personal experience of visiting care homes and the view that ‘sometimes care homes are where we discard the elderly’. Tender, emotionally mature and with a vividly realised sense of place, this story of a young man visiting his grandmother for their weekly bingo sessions was also inspired by memories of bingo sessions at Butlins, family experiences of Alzheimer’s and his grandparents love for each other.

‘The Changeling’ by Lottie Mills:

Previously shortlisted in 2018, Lottie Mills #OwnVoices story was inspired by frustration with ‘how difference, especially disability, is represented in fiction’. Reclaiming the myth of the ‘changeling’ and transforming it from something used to persecute and exclude into something magical, she explores disability via the fantastic in this ‘heartbreakingly well-written’ and ‘genuine triumph’ of a fable about a young girl’s extraordinary coming of age.

‘The Battle of Trafalgar Square’ by Naomi Thomas:

Described by judges as a ‘a punch in the face of a story, in the best possible way,’ an ordinary commute on a crowded tube train is transformed into a surreal and darkly, comic experience when a woman has an unexpected and shocking accident. Written as practice for Naomi’s English Language GCSE, the story exposes both the good and bad in human nature via a short story that highlights the power of the form to ‘give us a complete literary experience in and of itself’. An avid short story writer, Naomi was Highly Commended in the Young Northern Writers’ Awards 2020.

The shortlisted stories can be read and listened to online at: www.bbc.co.uk/ywa

ABOUT THE SHORTLISTED WRITERS:

Maleeha Faruki is 18 years old and lives in Leicester. She credits her ambition to become a writer to a secondary school English teacher, who helped her to realise her love for writing. She finds connection with others through stories and uses writing as a way of processing her thoughts; she has kept her work mostly private up until now. In her shortlisted story, Maleeha addresses the prevalent issue of immigration, inspired by her own father’s stories of life growing up in India and moving to England. She reads across many genres, but in recent months has found herself leaning towards dystopian fiction, like Fahrenheit 451 by Ray Bradbury and 1984 by George Orwell. Maleeha will begin her degree in English and Creative Writing at the University of Leicester this autumn.

Mei Kawagoe is 15 years old and lives in Leicestershire. She writes constantly – in her head, on scraps of paper, in notebooks or on her laptop – and in all forms, from short stories to journalistic pieces and poems. She has been a member of a monthly creative writing group for two years, for which she performed her writing at the Royal Shakespeare Company’s The Other Place in Stratford, and also attends a weekly journalism group. Mei loves how words make her feel and is an avid reader; some of her favourite books include Bridge of Clay by Markus Zusak, Little Fires Everywhere by Celeste Ng, and Gravity is the Thing by Jaclyn Moriarty. She submitted her story after being inspired by the strength and brilliance of the 2019 YWA shortlist and has previously submitted her writing to BBC 500 Words; Queen Mary Wasafiri New Writing Prize; Fireside Magazine and Vogue Talent Contest. She is one of 15 winners of the Daunt Books Children’s Short Story Competition 2020, which will see her writing published in an anthology with an introduction by Patrice Lawrence.

Ben Marshall is 18 years old and lives in Kent. This is the first short story Ben has written outside of the school curriculum and since finishing his English GCSE. His real passion is film and being shortlisted for the BBC YWA has given him the drive to start writing screenplays. His dialogue was inspired by film and TV, particularly Steve Pemberton and Reece Shearsmith’s Inside No. 9 and Aaron Sorkin’s work, namely the opening scene of The Social Network. Ben is due to begin a degree in physics at Durham University this autumn.

Lottie Mills is 18 years old and lives in Hertfordshire. She was previously shortlisted for the BBC YWA in 2018 for her story, Unspoken. Currently studying English Literature at Newnham College, University of Cambridge, books and literature are her greatest loves. When she isn’t reading, Lottie is writing, either on her laptop or, if writer’s block strikes, on her 1930s typewriter. As a disabled person who was often stuck indoors as a child, she knows how vital stories are to our wellbeing – her favourite children’s authors included Hilary McKay, Lemony Snicket and Liz Kessler, the latter of whom she has remained in touch with and has been a real inspiration to her writing journey. Lottie recently became frustrated with how difference and disability is represented in fiction and wanted to write a story which reflects the unique strength of outsiders. She is currently working on her first novel, a children’s book, and aspires to be an author as she knows first-hand how life changing the right story can be.

Naomi Thomas is 17 years old and lives in Sheffield. She is part of the creative writing group Sheffield Young Writers, who encouraged her to submit her work for the BBC YWA, and a new member of the Writing Squad – a development programme for writers across the North. She sees reading and writing as two sides of the same coin and enjoys fiction that is distinctive, like Angela Carter’s Wise Children, or informative, such as Andrea Levy’s Small Island. Equally, cosying up with something familiar like Sherlock Holmes is one of her favourite ways to relax. Naomi believes art can be a formidable proponent for social change and sees creativity as a wonderful way to explore her faith, beliefs and identity. She currently writes mainly short stories and was awarded Senior Runner Up in the Orwell Youth Prize 2020 for her piece The Michelin Woman. She was also Highly Commended in the Young Northern Writers’ Award 2020 for a selection of her work. Naomi is currently in sixth form and is hoping to study English Literature at university.

ABOUT THE AWARDS AND PARTNERS: