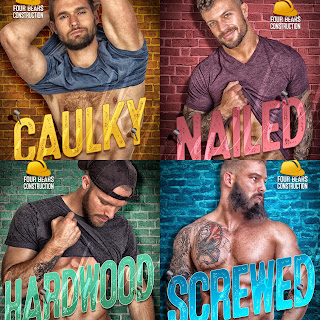 So, the past few months as been an interesting/scary time for us all, hasn’t it? And I am still scared out of my mind that the UK will go into a second national lockdown (let’s not talk politics now. I don’t think I can handle writing politics on the blog). So, I wanted to talk about one of the series I have been reading throughout lockdown and me being furlodge. Yes, I binged The Old Kingdom series by Garth Nix and loved revisiting this world, but how about a new series? Something that wasn’t on my radar till just before lockdown…

Four Bears Construction series by K.M. Neuhold came on my radar by fluke. The first book in the series, Caulky, popped up on my Amazon under that “Inspired By” and, yes, the cover for it is very eye-catching [insert gif of Blanche from Golden Girls here] and the synopsis catch my attention so, on a whim, I bought it and read it. And had such fun that I have continued with the series…

The Four Bear Construction series is an adult MM romance series, which has little to no angst (though there is angst. The first and fourth books are quite sweet, while the second and the third has a slightly angsty edge) and they all end with a Happy Ever After.

So, yeah, this is VERY not me. I mean, straight-up romances aren’t my usual go-to for reads, but you have seen in the past that I have tried to dip my toe into romance. Sometimes, it works and I have had a blast, other times have been… well…

So why is this series the series I have hooked into? I have no idea. But this series, as well as my reread of Garth Nix’s The Old Kingdom, has been my COVID-19 series go-to.

Now, I have blogged my thoughts of the first two books in the series - Caulky and Nailed (the links for them are here and here!) - but I haven’t for the third nor the fourth - Hardwood and Screwed - but that was due to sudden, much needed blog break (though Hardwood did get a tiny write-up on my Goodreads and will probably do the same with Screwed once I get my brain in order. But then, am writing this post so …)

So, in case you haven’t any of my posts, let’s do a quick skim over the four books. Now, before I go any further, you can read these as standalones as each book focuses on one romance, but if you read the whole series, certain events make more sense.


Caulky follow Cole and Ren’s relationship. Ren, trying to recover from a nasty break-up, decides that relationships aren’t worth it and decides to have a one night stand with a handsome stranger in a bar who Ren is certain he will never see again. Shame the guy is Cole, one of the owners of a construction company and the constructor who’s redoing Ren’s bathroom… And, to make things more You’ve Got Mail, both guys are faceless dating profiles and are messaging each other, making this a weird little love triangle between two people…

Nailed follows Cole’s friend and co-owner, Stone, who can’t understand why his new neighbour, Dare, hates him. Well, if Dare thinks Stone is the neighbour from hell, Stone is up for the challenge and decides to take a joke to the next level: mowing his lawn at six in the morning on a Saturday, dying Dare’s dog pink, hiring a petting zoo without asking. But when the reason for Dare’s hatred is due to a misunderstanding and Stone tries to apologise, the anger between them turns suddenly into a hot kissing and nearly having sex at Dare’s front door session.

Hardwood follows Everett who is coming to terms with his sexuality identity after divorcing his ex-wife years ago and feels him coming out now in his forties is too late. But when he meets his young daughter’s music teacher, Watson, Everett questions his choices and, while Watson is happy to do many Firsts with Everett, Everett isn’t sure he can come out to his family and friends and while Watson is patient and kind, he won’t live as a secret forever…

And Screwed follows Cole’s brother, Ollie, and Ren’s best friend, Daniel. With one massive hangover, the pair discover that they are married and, when the guys tease Ollie about another failed marriage (this will be his fourth - what can I say, he loves love), Daniel won’t stand for it and say they’ve been dating for months in secret and bet the guys that this marriage is going to last eight months. As the pair fake their relationship, feelings begin to come to the surface. But Can a man who loves being in love and a man who’s cynical about love be made for each other?

Ok, I admit it again, romance is not my go-to genre though I do read it. But there’s something about this series that I adore. It’s fun, sweet, hot with a little angst (not much as I loathe too much angst and the fact characters DON’T TALK TO EACH OTHER - biggest pet peeve when I read romances) with happily ever afters. It was just so much fun to read and, with everything happening in the world right now, sometimes you just need something fun to take you away for a few hours!

Like I said before, this isn’t everyone’s cup of tea. I mean, in theory, this shouldn’t be mine, but here we are. And, because this has become my COVID-19 coping series, it got me thinking about what you guys have been reading/obsessing over during these trying times (I might write a blog post about my COVID-19/lockdown TV viewing as there’s a theme on that - MURDER!)? Leave a comment or hit me on the socials and we can have a chat!
Posted by Pewter Wolf at 12:00:00