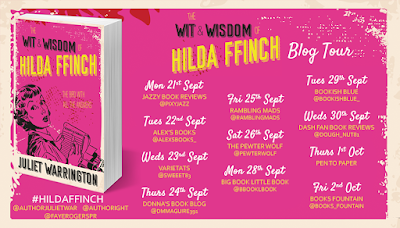 Possible my last blog tour alert for a while, but this caught my eye randomly and I knew I had to get involved in this tour in one form or another!

So, The Wit and Wisdom of Hilda Ffinch. In the small village of Little Hope in deepest, darkest Yorkishire during the Second World War, villagers are trying their very bet to Keep Calm and Carry On. It isn't exactly easy, not with the air raids, the evacuees and the shortage of knicker-elastic (THE HORROR!), but they are trying.

Enter Mrs Hilda Ffinch. A bored but terrible rich lady of the manor who decides, after a glass or too many gin and tonics, to do her bit and become Agony Aunt for the local paper... I mean, what can go possible wrong with this?

Now, before I hand you over to a guest post from the lovely Juliet Warrington, I want to thank her for finding time to write this guest post, chatting about Hilda. I, also, want to thank Blue from Kaleidoscopic for asking if I wanted to be involved in this tour.

And, before I give you Juliet's guest post (where she chats about her favourite things about being a writer), if you want to say hi to Juliet, you can do so via her Twitter (@authorjulietwar) or check out her website, mrsfoxgoestowar.co.uk. I, also, want to thank Blue from Kaleidoscopic Tours, for asking if I wanted to be involved in this blog tour.

With that out of the way, OVER TO YOU JULIET!

Favourite Things About Being A Writer
1. Where else can you work in your pyjamas whilst tucking into tea and biscuits? It’s an occupation which lends itself effortlessly to shouting to Alexa to play a bit of ABBA whilst you have a bit of a think and leave your desk for an hour to peer through the net curtains and observe the odd people across the road at number twenty. I don’t have a cat these days, but if I did then it could sprawl happily across my desk as I work, yawning away and flexing the odd paw (with just a hint of claw) over the keyboard at inopportune moments. In a conventional office I’d have to keep grabbing it by the scruff and wrestling it quickly into a draw full of bisquits and catnip whenever the boss came in. The cat wouldn’t be happy and neither would I! 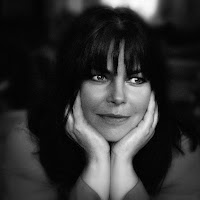 2. I love being able to listen without interruption to my own thoughts as my story and characters begin to take shape and to mutter to myself without interrupting others as I work. I do mutter a lot, generally when I’m going back over the work I’ve just done, and very often I’ll ‘have a bit of a go’ at a character for something they’ve just done; “Did you ought to have done that?” or “What were you thinking, you twit?” said aloud in the confines of your own little writing room is generally acceptable (after all, there’s no on else there to argue) but in a crowded office it can lead to raised eyebrows and funny looks, and no-one really wants that.

3. I love creating new worlds and new lives and being able to go back in time and tidy the plot up as and when I like. Imagine being able to do that in real life! I think that if you create and shape your characters well enough, then they do actually help you to build your story and write your book. A well-crafted character won’t lead to an attack of the dreaded ‘writer’s block’, you don’t find yourself wondering which direction your plot ought to take as you’ll know instinctively what that character would do in a certain situation. You become almost an on-the-spot radio news reporter, telling people what you see as events play out before you. In reality you might be looking out of the window and up at a clear blue sky, but in your mind’s eye you’re watching your character scuttling down a lamplit alleyway at midnight – you’ve no idea where they’re going but you know that you’re about to find out!

4. I don’t know about other writers, but I’m a bit melodramatic in real life at times. Not full-on fainting down a staircase before a captive audience or quoting Shakespeare at the bacon counter in Tesco or anything, but you know, I do get a bit excitable during the course of a heated discussion or debate. The good thing about being a writer is that my friends and family do rather tend to give me a little bit more leeway than one might expect sometimes, probably because they’re afraid that I’ll put them in my next book and kill them. My cousin recently bought me a lovely mug with just that sentiment stamped on the side! 😊 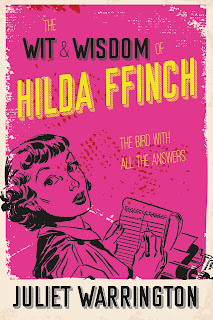 5. No matter what the weather, when you’re ensconced in your workplace of choice with your laptop and a story in your head then life’s good. If it’s hot outside, then I’ll take my work out into the garden, and set up the bistro set and parasol and crack on, pausing only occasionally to swat the odd wasp or exchange a word with my neighbour over the fence. If it’s snowing outside, then there’s nothing better than sitting cross legged on a freshly made bed, laptop across my knees, a faux-fur throw draped (melodramatically of course) about my shoulders and a nice hot cup of tea to hand! My characters may be caught struggling through a snowstorm of epic proportions or floating away from a mid-Atlantic shipwreck, but I get to settle down comfortably!

6. It’s sooo satisfying when you finish your book and finally get to type the words THE END onto well, the end, of your document!. You’ve watched and recorded a series of events from start to finish, worried and fretted about your characters, rolled your eyes at their antics and almost ducked and run for cover yourself when the air raid siren in your story has gone off. But it’s over, it’s done, it’s down on the page. Over the past few months you’ve eaten for England, day and night. You’ve noticed your clothes getting smaller that’s been a secondary consideration. Your primary goal has been to get to the end and not to leave that tale half achieved. And you’ve done it. Game over. Time to put down the bisquits and slink back to Slimming World. Yesss, result!
Posted by Pewter Wolf at 08:00:00