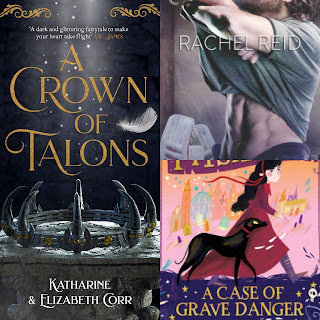 My first review-is post and it's mini-reviews. I have decided to write a mini-review post for the next few reads (unless one screams "I NEED YOUR UNDIVIDED ATTENTION!!!") but these three titles I think just need a nice, short review. Very similar to what I wrote on my Goodreads (goodreads.com/pewterwolf), but not exactly.
Now, quick note, the three mini-reviews below are titles I have been gifted very kindly by publishers either physically or via NetGalley. All were kindly gifted, of course, in exchange for an honest review/reaction (and when have you guys known me to be filter my opinions?). But then, all the titles I review and chat on here, I do try and be as honest as I can with you all as possible.
Let's start with Rachel Reid's Common Goal. Veteran goaltender Eric Bennett is thinking about life after hockey. He's ready to retire from the game and with his divorce happening, he wants to find his feet with his sexuality of being bisexual. When he becomes friends with the much younger Kyle, the two have an almost instant connection. But Kyle have been hurt by having a romance with an older man before and has no intention to get emotionally involved again. But helping Eric out by having a friends-with-benefits arrangement is a good idea, right...?

This reads like a lovely, fun and fluffy romance. And I did have a good time with it (expect I kept getting names muddled and it took me a while to get characters and their names straight in my head). I think I do enjoy MM romance that have little to no angst (but I think I prefer romance with no-to-little angst in general)  and while the angst was low for a good chunk of the read, the issues of the main characters's ages and the age gap is the thing some readers might have issue with (Kyle is 25 and, if I am remember right, Eric is 40 or 41. There is a 15ish year age gap). To me, this wasn't as big issue but knowing this would be the thing that would cause the conflict, I did feel a "meh" over the typical romance novel break-up and then the resolution being so quick [(penultimate for the argument and then the final chapter for the resolution [though it was two months later)].
I do think I will read one more book in this series as I do like them, they are a platter cleanser.
Let's change it up from M/M romance to mysterious middle-grade (I am a weird reader, I know). A Case of Grave Danger is the first in Sophie Cleverly's The Violet Veil Mysteries. Set in Victorian London, Violet is the eldest of an undertaker, but because she's a girl, no one really takes her seriously. Then a body of a man wakes up and throws her whole family throw. Things then take an even darker turn when Violet's father is arrested for four murders, all similar to the now-not-dead corpse called Oliver. The Police are positive that Violet's father is a murderer, but Violet knows he isn't. A murderer is out there, framing her father, and no one is going to stop Violet from finding out the truth.
This is a nice, fun Victorian middle grade mystery, and I highly recommend it, but I'm not sure about Violet's gift that she can hear and talk to ghosts. This felt like an add-on and wasn't (pardon the pun) fleshed out. Plus, this gift didn't really help Violet solve the case. I think this will become more important as the series moves forward, but this gift didn't really add anything to this mystery. And yet, I'm intrigued to see where this series goes next...
Let's end this post on a darker not with the grand finale in the A Throne of Swans duology, A Crown of Talons by Katherine and Elizabeth Corr. After the events on Throne of Swans, Aderyn is on high alert. Enemies outside and within court are watching her and thinking she and Aron, her cousin, aren't enough to rule. But with nobles from neighbouring country fleeing for their lives - the flightless have risen up and overthrown their rules - and an attempted assassination is made on Aderyn's life, the world is changing and Aderyn must have the strength to overcome everything to save her kingdom. Or die trying...
Basically, imagine Swan Lake and Game of Thrones having a lovechild and you have the idea.
Once I found my footing (real life made this hard to do), I thoroughly enjoyed the dark, bloody mess of this. I think, out of all the duo's books, this series (especially this book) is the Corr's sisters strongest outing. It's darker, full of twists and equally romantic and heartbreaking. I do think there are moments/twists that I wish weren't so obvious (I saw them coming quite a distance away), but this is a strong and bloody conclusion and, with the world as vast and rich as it is, I kinda want a companion novel/novella.
Posted by Pewter Wolf at 12:00:00