The Secret Extract of Albert Entwistle 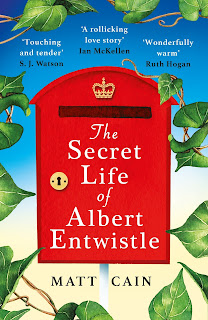 EXTRACT ALERT! I have an extract for you guys and, oh, it's from a good'un of a book. Possible one of my faves of the year so far! Yes, it's THAT good!
The Secret Life of Albert Entwistle by Matt Cain follows the life of 64 year old postman Albert, who loves his job, keeps himself to himself and has lived alone since the death of his mother 18 years ago (barring his cat, Gracie). But when he discovered that he's going to be forced to retire on his 65th birthday (Royal Mail policy), Albert realises that a lonely future awaits him which terrifies him. Realises that he's been hiding from life, Albert takes baby steps to being honest with himself and the world about who he truly is. And, in doing so, Albert hopes to find the courage to look for George, his first love...
My review on this is up next week, but you can tell from the above that I adore this book and wanted to do as much as I can to share the love. So, when Rosie from Headline asked if I wanted to share an extract for you guys, I jumped at it! Plus, if you watch Twitter the next few days, a few other book bloggers (I think) will be sharing more extracts and maybe one or two will do contests!
Before I share the first extract of the week, I just want to thank Rosie for asking me to be involved (and knowing I would say yes as tweeting A LOT of thoughts/feels to her and the author while I read). I, also, want to point you in the direction of the author, Matt Cain's, website (mattcainwriter.com) and his Twitter (@MattCainWriter) so you can say hi. If you want more info on Albert Entwistle, you can pop over to the publisher's, Headline, website.
Ok, all house keeping out of the way, ONTO THE EXTRACT! Enjoy!!!

One dark and frosty December morning he arrived at work, safe in the knowledge that the day ahead would be the same as any other – and exactly the same as it had been for years and years.

It was a few minutes before six o’clock when he cycled into the yard at the back of the Royal Mail delivery office on the industrial estate at the edge of Toddington town centre. A cold, hard light leaked out of the windows of the onestorey, grey-brick, corrugated-iron-roofed building, a building cheered only slightly by the woodwork and doors, painted the distinctive red of the company’s branding. Albert let out a yawn as he dismounted and chained up his bike. He checked his watch. The minute hand was approaching the hour. By the time he walked through the door it would be 6 a.m. Exactly as it should be.

He unfastened his duffel coat and tugged his ID card out from around his neck, leaning forward to touch it to the magnetic sensor. The familiar buzz told him the lock had been released. He walked inside.

Ste Stockton was a handsome man in his twenties with muscles that looked like body armour. He was so obsessed with sharing images of his physique online that he rarely took any interest in whoever entered the building ‒ a quality Albert acknowledged wasn’t ideal in a security guard but, all the same, he appreciated in Ste.

‘How do,’ Albert said with a nod. It was his standard greeting and delivered in a way that made it clear no response was necessary or desired. Over the years he’d become adept at deflecting opportunities to interact and, as he’d entered his sixties, noticed that people paid him less and less attention anyway. This suited Albert perfectly; if he had his way he’d be invisible.

As he fringed a line of trolleys and headed down the corridor to the main sorting office, he braced himself for the hardest part of his day. Albert always tried to dodge his way through the waves of chatter that peaked and crashed between his colleagues, particularly on Monday mornings; so many of them wanted to exchange summaries of what they’d done over the weekend. These days, most people left him alone, though some of his newer colleagues made the mistake of assuming that, because they had a life away from work, he must do too. When they realised he didn’t, they’d feel sorry for him.

‘Have you ever thought about taking up a hobby?’ they’d ask.

Hoping he wouldn’t be subjected to any such attention today, he buzzed open the door and stepped into the hall.