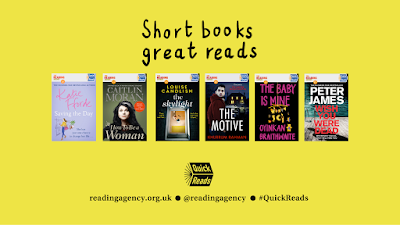 Happy Quick Reads Day! Today is the day where the six titles of this year's Quick Reads are published! We have Saving the Day by Katie Fforde, The Skylight by Louise Candlish, The Baby Is Mine by Oyinkan Braithwaite, Wish You Were Dead by Peter James, an abridged How To Be A Woman by Caitlin Moran and The Motive by Khurrum Rahman.
According to the the Reading Agency, one in six adults in the UK struggle with reading and one in three do not regularly read for pleasure. Also, England is rank 23rd out of 23 OECD nations for literary levels among 16-19 year olds and studies show that those who read for pleasure have higher levels of self-esteem and show a greater ability to cope of difficult situations.
This year marks the final year of funding received when, several years ago, the best-selling author Jojo Moyes gave a donation to help fund the Quick Reads programme for three years. So, when the lovely people at Midas asked if I would be involved in making some noise about these titles, I was honoured. What more, I was asked if I fancied reading one of these titles and chatting about it. I was happy to read any, but had hopes for one title in particular. So, I am thrilled to talk about that title in question: The Motive by Khurrum Rahman.
The Motive acts as a short story and a prequel to the first book in the Jay Qasim series, East of Hounslow. 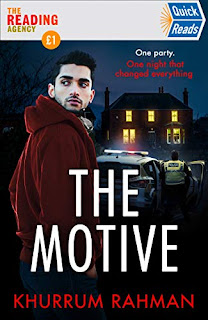 It's the eve of the Brexit referendum and business is slow for small time drugs dealer, Jay Qasim. So when he hears about a student house party, he decides to break his own rule and go, selling weed to make quick easy cash. But before he can leave, Jay finds himself in the middle of a crime scene. One of the party goers has been stabbed...
Jay's best friend, Idris Zaidi, is a Police Constable. He was meant to have a quiet night on patrol, but when he's called out a noise complaint at a house party. When he gets there, though, he finds Jay and, before he has the chance to tell Jay to leave, a party goer with a knife sticking out of him.
Tensions are running high, not only with the UK decided to stay or leave in the UK, but someone at the party is an attempted murderer...
Damn it, I'm going to have to buy the rest of the series now, aren't I? I had such a blast reading this. Jay's humour was a joy and it carries the story along nicely. Plus, I haven't read a character like Jay in a UK thriller: British Muslim, dope-selling, runs his mouth off, but is very observant young man.
Idris is very different, but his character was a nice contrast. Quieter, focused on the job, but his chapters hinted at Police brutality and racism within the Force and if he's as big a character in the series as I hope, I think reading these aspects are going to be enlightening (and yes, uncomfortable) reading...
The crime itself, for me, was a bit thin (for me, anyway), but I was in this for Jay and Idris. I loved them separately and then together. I can't wait to find time to dive into this series! A nice addition to the Quick Reads selection!
Posted by Pewter Wolf at 08:00:00