Another day, another mini-review post. So, what makes this one so different from my other mini-review post? Well, unlike the other titles which were kindly given to me via publishers, these three titles are titles I either bought out of my own money or borrowed from my local library.
Yes, I put my money where my mouth is and bought many books, ebooks and audiobooks (have you not SEEN my TBR lists on Goodreads and my many wishlists on Amazon.co.uk, Audible and other online retailers?!). So, while I should do another mini-review post of some of the library books and NetGalley/Gifted by Publishers, I thought I would do a small post about these three titles: Dead In The Water by Chris McDonald, The Other Miss Bridgerton by Julia Quinn and The Lady With The Gun Asks The Questions by Kerry Greenwood.
But, to cut to the chase, these were all fun reads and I had a blast. Like I warned earlier this month, I want to read fun for a while before I scare you all with books that make me think/turn me into a furious reader. So, shall we start? 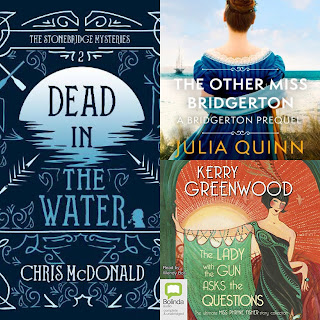 Let's start with Chris McDonald's Dead In The Water, the second in the Stonebridge Mysteries, a cosy murder mystery series set somewhere in Ireland (not sure why). After the events of the first book and our leading duo solving the murder of Daniel Costello, Adam and Colin have made a small name for themselves, and while trying to get his gardening business off the ground (no pun intended), Adam is asked by a widow to look into the death of her husband, the captain of the rowing team. The Police said it was an accidental drowning, but she's not sure. And while Adam knows he shouldn't, the lure of a mystery pulls him and Colin in, looking at the members of the rowing team and their main rivals and wondering it was an accident or if something more is at foot. Along the way, both do things they're not completely comfortable with and both begin to start growing up a bit.

This is a fun, snappy novella and I could have blitz it in a day but savoured it over the course of several. This might not have been full-on funny like the first (both Adam and Colin were a bit hapless in their first outing), but there were moments where I snorted out loud. So, yes, I will be preordering the next instalment and I already have all three books in Chris's other series, DI Erika Piper, on my kindle.

Let's switch gears to romance. I know, who have I become?! The Other Miss Bridgerton is the third instalment in the Bridgerton prequel series, The Rokesbys. While walking along the Dorset coast, Poppy Bridgerton discovers a smugglers' hideaway tucked inside a cave. But her delight turns to dismay when two pirates discover her there and then decide to kidnap her and take her aboard a ship, leaving her bound and gagged on the captain's bed.

Except they're not so much smugglers as privateers and the captain, one Andrew James Rokesby, isn't so much a privateer as a former Navy officer who's now essentially a spy for the Crown, transport important documents and cargo. And his family are, basically, her family's neighbours in Kent. Looks like Andrew will have to keep one or two secrets from Poppy as, due to an important deadline, he has to kidnap her and take her to Portugal. But the more time the two spend together, sparks fly as she can't leave the Captain's quarters and he has nowhere else to sleep and they bond over jigsaws, reading, star gazing and trying to outsmart each other in a war of wits.

Romance at sea is one thing. But will these two get they happily ever after together once their feet are on dry land?

This was fun. It was a fun, fluffy audiobook romance where I rooted for the characters to kiss. It's not going to be ground-breaking literature - you know you're going to get kissing and sexual tension, a dash of danger with a happily ever after and babies - but you go with it because of the fun factor! This was fun, even when the ending felt as if it was wrapped up a little too quickly for my tastes! But barring that this was a fun, happy read and, sometimes, I need that!

And finally, (was doing three too much? Should I just do two next time?) is the collection of short stories set in the world of the Honourable Miss Phryne Fisher series, The Lady With The Gun Asks The Questions. As you know, I have only audiobooked three from my local library in this order: Murder on the Ballarat Train, Flying Too High & The Green Mill Murder, and while fun, most of these stories have been published before, I think, in A Question of Death: An Illustrated Phryne Fisher Treasury or else where.

But this was a fun collection. Might not be everyone's cup of tea and this does feel like a collection for the fans, but I do seem to enjoy "cosy" crimes lately...
Posted by Pewter Wolf at 08:00:00