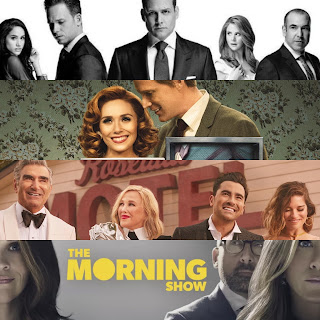 I think we all binge watch a bunch of telly during the lockdown and my partner and I did exactly the same. We’re still doing it with, at the time of writing, we have just finished Suits on Netflix UK (most of you will know it as the show that Meghan Markle was on while she was dating Prince Harry, but it’s a legal drama with a dash of humour, set in a fictional New York City law firm following a college dropout who starts working as law associate, despite never going to law school) and going to start Apple TV+’s The Morning Show (starring Jennifer Aniston and Reese Witherspoon, this follows a popular US breakfast show and what happens when the male host is fired for sexual misconduct and the female co-host of 15 years, tries desperately to stay in her job while sparking an off-air rivalry with her new co-host, a haphazard field reporter who makes very impulsive decisions).

But what did we watch during last year during lockdowns? Well... the Other Half and I had a think and most were crime-related. Should we all be worried about how many crime/thriller like programmes we watched?

Now, before I go any further, we are not talking rewatch. So no Friends, Big Bang Theory, The Good Place and The Blacklist, nor shows we were continuing with latest series such as Blindspot, Great British Bake Off and Taskmaster. We are talking new shows that my partner and I discovered during last year. (Does that include me discovering The Great Pottery Throw Down that I discovered late this year one evening?).

Do I really need to write about Line of Duty and WandaVision? I mean, EVERYONE BEEN TALKING ABOUT THESE SHOWS FOR HOW LONG NOW?! (Same with Schitt’s Creek, which I do talk about a little further down. You’ll see why in a tick.) WandaVision is set just days after Marvel’s Avengers: Endgame, where we see Wanda and Vision move into a small US town. Slight problem: Vision is dead and the couple’s lives are acting out as if they are in a 1950’s sitcom. Something dark is happening and Wanda might be, unknowingly, at the heart of it (I haven’t watched the final episode of this as this show is SO GOOD that I don’t want it to end!). And Line of Duty follows Police officers investigating corrupt Police officers. But are they really corrupted, tricked, framed to be the fall guy or innocent? This is one of those shows where you have to pay attention but once you find your footing, you are overanalysing EVERYTHING. [EDIT: I wrote this weeks before the series six finale and, while I do get everyone's reaction to it, I thought it was ok. Not the best, but I have seen worse finales.]

Billions is a bit of a left-field choice for me and my partner but we heard good things about this. The series follows hedge fund manager Booby Axelrod as he accumulates wealth and power in the world of high finance, but his drastic actions brings him to the attention of United States Attorney Chuck Rhoades who attempts to prosecute. Both play cat and mouse with each other, each trying to get the upper hand, all the while Rhoades’s wife is in-house psychiatrist of Axelrod’s company and trying to balance between her professional and personal lives. Let me saying something right off the bat: no one in the show, like Suits, is “the good guy”. They are very much in the Grey. They all believe are they are doing the right thing, but they do make decision which is close to breaking the law and very underhanded. [Quick Note: the Other Half fell for this show a lot quicker than me. It took him an episode while I took several. It was when I realised they were all awful people that I went “Ok, I get it now!”] 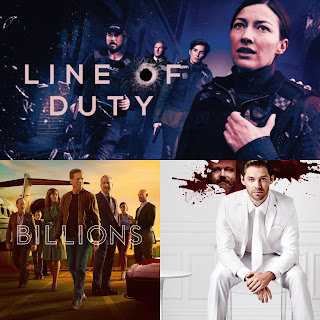 I was aware of Prodigal Son in 2019. Not sure when, exactly, but I remember seeing the huge Times Square advert when my Partner and I went to New York and it was a creepy advert. Not sure why I thought it would be a typical crime procedural as it’s so much darker than I expecting. Malcolm Bright is a disgraced former FBI profiler who was bought in to help the NYPD when a copycat killer strikes the city. The copycat killer is copying a serial killer known as "the Surgeon" (original, I know... *rolls eyes*) – who happens to be Malcolm’s father and Malcolm is still traumatized and fears he’s more like his father than he or anyone in his family want to admit. This is much darker and more violent than I was expecting, and once I got used to the show’s dark edge, I got quite excited to watch it. Also, the main character’s mother (played by Bellamy Young) is the show’s light relief with some of her cutting one liners, though viewers can tell she is clearly traumatized by the idea of being married to a serial killer and she’s might be a high-functioning alcoholic.

Things have gone dark, so shall we end it with a comedy? Schitt’s Creek. Oh yes, we finally got onto this after having nearly everyone and their parents shouting at us to watch. In case you haven’t watched it or heard of it (comedy is subjective, after all), the Canadian comedy follows a rich family who lost all their money and have to relocate to a small town that they purchased as a joke, Schitt’s Creek. Now, am going to admit, my partner and I did struggle as the Rose family were all so unlikeable (I think that was the point) but we kept going as you all say it got better and, around the fourth or fifth episode, it's almost as if the adult children of the Rose family had a bit of a personality transplant and, while still selfish, showed a softer, kinder side. The show continues to do so with the whole family over the six seasons and it became a feel good comedy. Very comforting. We're, actually, thinking of rewatching this in the coming few months...

That’s all the new shows the Other Half and I discovered during Lockdown. And yes, they are on the darker side. So, I’m curious on what shows you discovered and devoured due the past year. Leave a comment and let me know – I’m always on the hunt for new shows to discover (or old shows that I need to rewatch, or force the Other Half to watch... he’s resisting watching all 16/17 seasons of Grey’s Anatomy...)
Posted by Pewter Wolf at 08:00:00