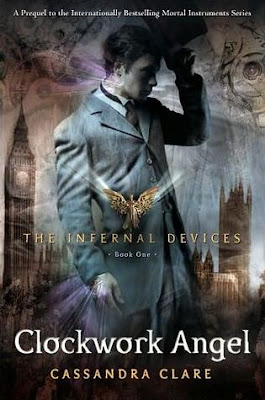 I have to admit I had this book since it came out last year. But, due to the fact I was ill then real life and other books got in the way so this kept going down and down in the To Be Read pile.

And then, Mundie Moms turned round to me after a short twitter chat and said "We're starting a Read-A-Long for Clockwork Angel", I decide to try and take part. So, I owe Mundie Moms a big THANK YOU to them for them to help me FINALLY get round to reading Clockwork Angel.

In this, the first book in the prequel trilogy for the Mortal Instruments, Tessa Gray arrives to Victorian London. But instead of her being meeting her brother, Nate. Instead, she is taken and held hostage by the Dark Sisters. When she is rescued by Will, Tessa finds herself slowly entering the world of Shadowhunters and Downworld, where demons, fairies and vampires are common. The deeper Tessa enters this new and dangerous world, Tessa finds herself in the middle of two friends and finding that is she more connected to this new world than she first thought...

Now, this is a strange book to me. I really liked the Mortal Instruments series (well, first three books, seeing as this new trilogy in the Mortal Instruments I haven't started yet!) so entering this world again was always an exciting idea, but going back to Victorian London was interesting. I'm not a great lover of historical fiction so reading this was going to be an odd read for me, but after the first few chapters, it felt like I had re-entering a wonderful world again, and I quite enjoyed this new side of the Shadowhunter world. 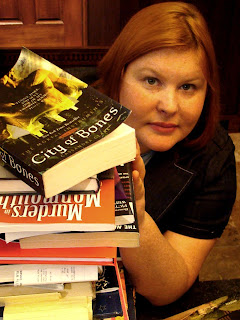 I did worry for quite some time about reading this (and I still have this fear with City of Fallen Angels [which is the fourth book in the Mortal Instruments series]) as I thought these books will ruin the magic of the first three books, but I shouldn't have worried.

While Clockwork Angel was a bit slow to start as this was Tessa discovering this world (and we knew it!), it picked up the pace and laid down the fountains for the rest of the trilogy, while explaining little titbits that were hinted in City of Bones, City of Ashes & City of Glass. It was, also, great not to have a "He's your brother!" twist (which caused many a reader to throw City of Bones across the room)! We have a love triangle. A REAL love triangle. And what an interesting triangle - quiet, thoughtful Jem and impulsive, hot-tempered Will. I fear I know where this might be going, but I live in hope! SURPRISE ME!

After all the twists that came out at the end of Clockwork Angel, I am itching to read the sequel, Clockwork Prince!