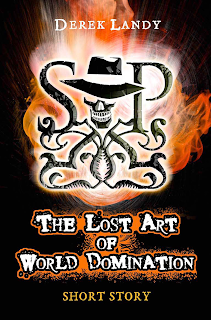 In my Kindle reading blitz, I discovered these on my Kindle. These are two short stories that you can get both of these FREE from HarperCollins and Amazon and these short stories take place between the main Skulduggery Pleasant novels.

The Lost Art Of World Domination is the first short story within the Skulduggery Pleasant series that takes place a few months after the first novel where our hero, Skulduggery, is chained to a wall while Scaramouch Van Dreg is planning on world domination...

Gold, Babies And The Brothers Muldoon takes place several months after the second novel, Skulduggery Pleasant: Playing With Fire. In this, Skullduggery's partner, 13 year old Valkyrie Cain has to make a delicate deal with a trio of ugly, hairy goblins for the lives of three babies. But these goblins don't intent to keep their side of the deal...

Now, I have to honest, I did read the first few books within this series but stop between the third or fourth books (The Faceless Ones and Dark Days). The reason why, though I loved the darkness of the series, I began to feel that the humour was being used less and less and that's why I got into the series in the first place. Though I have chatted to Rhys from Thirst4Fiction about this (and he told me that Dark Days has the jokes back while the darkness of the story is still there - his review of Dark Days is here!),
I am still hesitant over returning into this world. So, rediscovering these was a real treat. 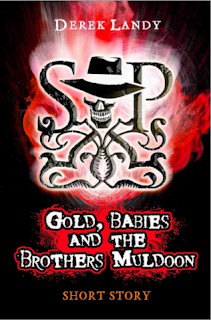 Though I still not 100% certain if I will return to the series (I hope so, but it might take some time), I at least will be open to reading more books in this series or return to the first book in the series. I know that there is a short story released for World Book Day 2012 - The End Of The World - in March next year and I hope to read that when it comes out and it will let me rediscover the joys of the skeletal Private Eye...