GoodRead - Thorn In My Side 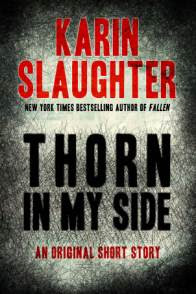 After reading a lot of novels recently, I wanted to do a bit of reading on my Kindle. It's being feeling a bit unloved. So, I decided to put the books that publishers and friends have given me on hold (I WILL GET ROUND TO THEM! I PROMISE!) and attack my Kindle for a few days. The first I read was Thorn In My Side by Karen Slaughter.

This short story tells the story of conjoined twins Kirk and Wayne. One night, Kirk picks up a random girl in a bar, while Wayne has to pretend he's not there. Expect dark deeds happen in the car park that night...

Now, in theory, this should be an interesting story. The idea of what would happen if a brother did a terrible thing while his conjoined twin tried to stop him and whether the law would convict one brother for the sin of another would have made interesting and gripping reading. Instead, out of the 68% that was the story, the second chapter (there was three in total) was the most interesting. It was very much an three act - crime, aftermath, consequence. And for the price of this short story - £1.83 - while Karen's other short story, The Unmarkable Heart was 47p, a tiny part of me thought I kinda got rip-off.

It has faults, but it wasn't awful either. I just feel that, unless you're a true crime or a Karin Slaughter fan, you might want to wait till this becomes free or cheaper than it is now...

(And now for music choices... I read this while I was listening to Kelly Clarkson's new album [which is AMAZING! I need to see her live! Anyone know if she's coming to the UK?] hence my choices! ENJOY!)

Email ThisBlogThis!Share to TwitterShare to FacebookShare to Pinterest
Labels: Books, GoodRead, Karin Slaughter, Kindle, reading, review, Thorn In My Side