After a leak that happened last week (and the cover wasn't meant to be revealed till March 2012!!!), Myra McEntire has revealed the cover for the second book in her Hourglass series, TIMEPIECE! Now, as Myra explained on her blog (which is here, FYI), this is the cover for the ADVANCE READER COPY so there will still need to be finalized.

So, after waiting to see if it's ok to put online, here is the cover of TIMEPIECE: 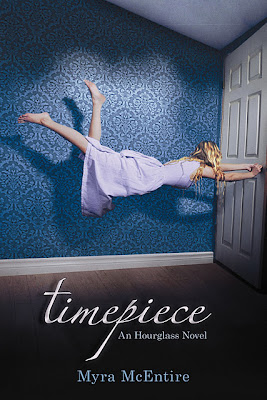 What do you guys think? I quite like it. It's on the same vibe as Hourglass but there's something more about it! I love the blue of it!

But what do you guys think of this cover? Reactions?
Posted by Pewter Wolf at 08:00:00