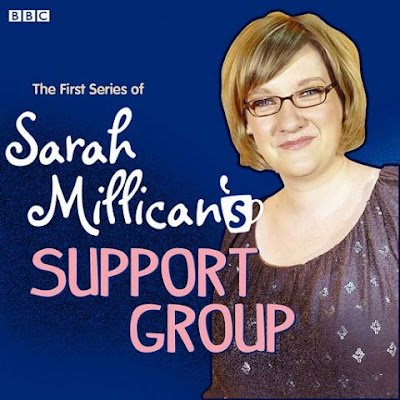 While my PIW (the Person I'm With - Last time I'm going to tell you this) and I were away for an anniversary to Alton Towers (I know. HOW ROCK AND ROLL OF US!) last month, we listened to this on the way back.

Sarah Millican's Support Group was a BBC Radio 4 series (this was series 1 - no idea if/when series 2 will be released as an audiobook or if BBC Radio 4 has commissioned a third series) where Sarah and two "experts", sexist taxi-driver Terry & snooty counsellor Marion who "did an Open University degree... and got a B" helped with fictional situations (such as dating outside your social class, a young man caught in the middle of his current and first love and a 50 year old grandmother rediscovering life, much to her daughter's horror among other situations) and having audience involvement, which allow Sarah to improvise.

I do love Sarah Millican so I found this stupidly funny. But I do know that she's not everyone's cup of tea in comedy. If you're not sure, YouTube her doing stand-up for the BBC show, Live At The Apollo and see if she appeals to you...