GoodRead - The Art of Marvel's The Avengers 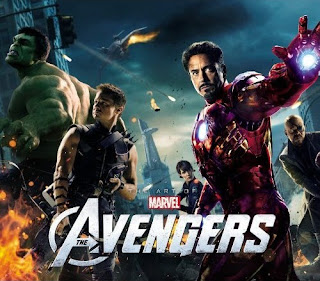 As you guys probably guess from my previous review of Harry Potter: Page to Screen, I'm a bit of a movie geek and I love the artwork that inspire a movie to be made. And after the beast that was Harry Potter: Page to Screen, I wanted another movie book that showed me the artwork. I was thinking of a Pixar movie (I would LOVE The Art of Finding Nemo or The Art of Up...), but after chatting to the lovely Jenny from Wondrous Reads via Twitter about the Avengers Assemble movie (as the movie was called in the UK, even though we called it Avengers) and that there was a book showing off some of the art linked to the movie. As soon as she tweeted me that, I knew that I had to get my hands on this book.

With the book giving the briefest of plots to the movie (Nick Fury at S.H.I.E.L.D decides to gather Earth's greatest superheroes - Iron Man, Captain America, The Incredible Hulk, Thor, Black Widow and Hawkeye - to defeat Loki), it's mostly the artwork that sells this and having some of the people involved in the artwork, including the director, Joss Wheldon (who has signed a deal with Marvel Studios to stay with them for a few more years to create a TV show entitled S.H.I.E.L.D for the american network, ABC [You can be damned sure that this will be showed in the UK!], and he will write and direct the second Avengers movie).

Now, the art is brilliant. It's always interesting to see how the ideas of the artists designs went onto the big screen and where the ideas came from, and with this begin so closely related to Marvel Comics, the inspiration to be loyal to Marvel's roots and yet making the designs fit in the modern world...

There were one or two sections that I wish were shorter (the Helicarrier section was over 20 pages and talking about the return of the Incredible Hulk was, while interesting, took a good ten pages), but if you are a movie buff or a huge fan of The Avengers movie (or maybe you're a fan of Joss Wheldon), this is perfect for you!

Oh, here is a trailer and a deleted alternate opening... enjoy!

Email ThisBlogThis!Share to TwitterShare to FacebookShare to Pinterest
Labels: Books, GoodRead, Marvel, reading, review, The Art of the Avengers, The Avengers