Alissa Howard, a 17-year-old from Somerset, has been selected as the UK and Ireland’s biggest Harry Potter fan. Her entry was chosen as the best in the recent competition run by Bloomsbury to celebrate the 15th anniversary of the publication of Harry Potter and the Philosopher’s Stone by J.K. Rowling.

Alissa’s entry (see below) was selected from over 6000 posted in bookshops and libraries throughout the UK. Alissa’s piece stood out for the originality in her poetic wording and in her colourful and neat artwork. Her last line of “You inspired a generation, now that’s magical” was especially loved. 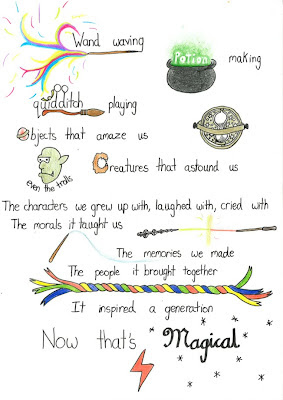 After hearing of her win Alissa said: "I was quite surprised to hear that I had won, and now I just can't believe it. It'll take time for it to sink in but I am really happy to have been chosen as the winner."

To celebrate the 15th anniversary of the publication of Harry Potter and the Philosopher’s Stone Bloomsbury launched a nationwide competition to find the UK’s biggest HARRY POTTER fan. Bloomsbury invited fans to write a letter of no more than 50 words explaining why they love HARRY POTTER. Fans could only enter by visiting a local bookshop or library and posting their letter in the specially designed postboxes. Over 1800 bookshops and libraries signed up to take part.

From an idea born on a train journey, to its creation in a small café in Edinburgh, Harry Potter and the Philosopher’s Stone is the book that started a global phenomenon.  Rejected by many publishers and with an initial hardback print run of 500 copies, it is the book that put Harry’s destiny in motion and created a whole new generation of readers. It is hard to think now that before 1997 none of us knew about Hogwarts, Quidditch or Voldemort (who was voted as the favourite literary villain in a recent Bloomsbury poll).

The competition results will be available to view from Saturday 1st September on the HARRY POTTER competition website – www.bloomsbury.com/harrypottercompetition

(This was the press release [which was embargoed, FYI] but as a Harry Potter fan, I am thrilled that Alissa has been called the UK and Ireland's Biggest Harry Potter Fan! Congratulations!)
Posted by Pewter Wolf at 13:06:00