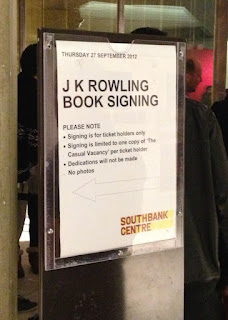 I like that no matter how casually I title this, I feel like screaming, shouting, crying and in daze as I don't HONESTLY know if this has actually happened or if I dreamed it...

So, the short version. Me and my other half went to the South Bank Centre, met up with some book sellers and book bloggers, watched JK Rowling do two readings and answer some questions from the interviewer and the audience, then get my copy of the Casual Vacancy signed.

That is the short version. The long version is that my other half and I got there REALLY early (we got lost round London so we just decided to go there and get a coffee) and we bumped into two people who work in my local Waterstones (whose names I have COMPLETELY forgotten so for that, I am sorry and I will come in soon and buy something as an apologise!) who run their store's Twitter (@WatChelmsford). They've uploaded pics here so you can see who I met. It was a tad surreal as they went, out of nowhere, "Excuse me, are you Andrew?" and we chatted about me never tweeting the sentence "Am in @WatChelmsford, sneaking round the shelves!" EVER again. After that, I bumped into Leanne from District YA & her Mum (who is a lovely woman! She reads more books than I do!) and I met Daphne from Winged Reviews. I knew that Sarah from Hot Key Books was there (but never saw her). Later that evening (when the audience Q&A), I discovered that one of the editorial director from Leaky, Rosianna, was there and then, this morning, I discovered that one of my fave YouTuber Lex was there too.

I know that means nothing to you, but to me, this is HUGE!

Anyway, after this, we all went into the hall and sat in our seats. After a quick "Hello" from the South Bank Centre's Artistic Director who compared JK Rowling to Lady Gaga with the amount of buzz surrounding her and  her The Casual Vacancy, she introduced JK Rowling and her interviewer, Mark Lawson. When she came on stage, JK Rowling got a standing ovation! And she hadn't even said a word!

After that, JK Rowling (I know I write her name in full but I can't write "Jo". I can't!) read a brief section from the "Prologue", Mark asked her questions about the book, the characters and tackled the themes that are in the book such as death, morality and sikhism.

After this, the live web stream was turned off (highlights of the event is here [I can't embed it into the blog. Sorry]), JK did a second reading, which had several swear words in it (yes, this is an adult book and yes, a tiny part of me was overjoyed to hear JK Rowling swearing! I'm not sure why, but am sure most people wear shocked [I hope not though...]). Not sure what page it was but I will tweet it when I get there... And then, after that, questions were taken from the audience (I think it was meant to be taken from Twitter as well, but I can't remember if any were used). These questions ranged from advice about writing, death, if there were characters she liked and disliked. One person gave her a gift. 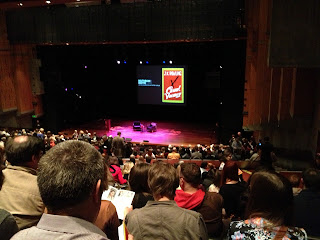 And then, the mad rush to get your copy signed. Oh dear Lord. The less I say about this, the better. I am not in a ranty mood. I won't go there. If you were there, you understand. If not, YOU GUYS COULD BREATH WITHOUT FEARING THAT YOU WOULD HIT SOMEONE! Anyway, after an hour (that's SHORT!) I got my copy of The Casual Vacancy signed. You couldn't take pics of JK Rowling (plus the only one I have on my photo makes her look like one of the faceless people from that Doctor Who episode, The Idiot's Lantern), you couldn't talk to her nor ask for a dedication. I was ok with that. I WAS GOING TO MET JK BLOODY ROWLING! And when she was signing my copy, all I could say was "Thank you." She said thank you back (*faints with delight*) and I went off bouncing, skipping and probably looking like a completely idiot. I smiled a lot that train journey home.

And still, it feels one very surreal moment...

So, JK Rowling, if you are reading this (highly unlikely but you never know...) thank you. 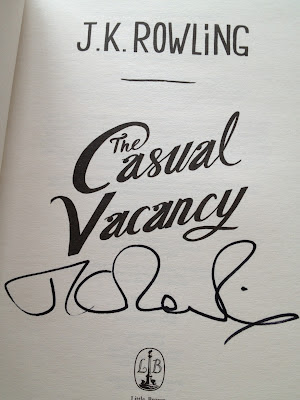 (PS - for those of you wondering, I'm not far in. I only read up to page 27 yesterday [busy day] and am in no hurry to read this. I am going to take my time and savour it.)

(PPS - I have been told by Daphne from Winged Reviews that I was frighteningly calm while in line and then meeting JK Rowling. I have no idea why I was so calm. I think I must have gone into shock or something... Hence the whole "this is surreal" moments I'm having...)
Posted by Pewter Wolf at 12:40:00